Pendennis recently announced that work has started on Nostromo a new 30m sailing Yacht. The Dubois designed sloop was commissioned back in August 2007 and their fabrication team started work on the hull in early January with the arrival of the cutting package from Holland. 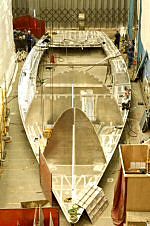 The deck has been laid and the bulkheads erected. Currently the frames and stringers are being assembled into position ready to receive the shell plating. By Mid March the engineers will have started work putting in the bulkhead penetrations. The hull is scheduled to be turned at the end of March and finished by mid April at which point the bilges will be released to the painters.

Charlie Ross, the build’s Project Manager commented “The project is moving at a good pace and we have some key decisions already under our belt. The rig supplier on the yacht has been confirmed as Hall Spars and Rigging (US) and due to our own joinery department having prior resource commitments the interior will be produced by Dorr.”

The whole project team are currently working towards having Nostromo launched in time for the summer season 2009.