As a regular reader of SuperYachtTimes.com, you will by now be very familiar with the superyacht known as Sailing Yacht A as we have closely followed this bizarre sail-assisted motor yacht during her various construction phases and travels in the Mediterranean. But just as custom and deserving of a closer look as the mothership herself is Sailing Yacht A’s fleet of custom tenders, each as radical and eccentric as the next. Here, together with local Monegasque photographer, Raphaël Belly, we take a closer look at the four tenders that will be whisking this 142.8-metre superyacht’s guests ashore. 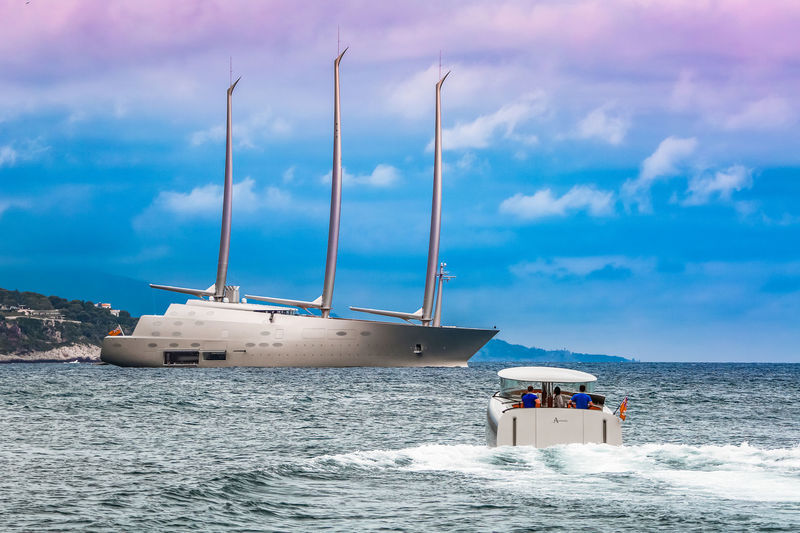 For the execution of the build of these four highly custom craft, Lloyd Stevenson Yachts from New Zealand were selected to realise the vision of Sailing Yacht A’s owner together with the ship’s designer, Philippe Starck. Naval architect Brett Bakewell-White of Bakewell-White Yacht Design in New Zealand joined the project for his naval architecture expertise. 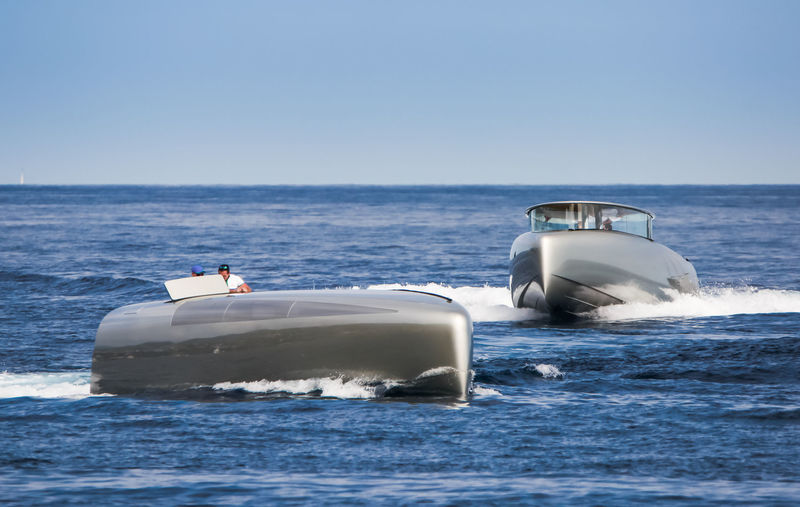 The brief called for four functional craft to serve several critical operations associated with the yacht’s use. The design of each follows the same other-worldly approach by her French designer as captured in the styling of the mothership. 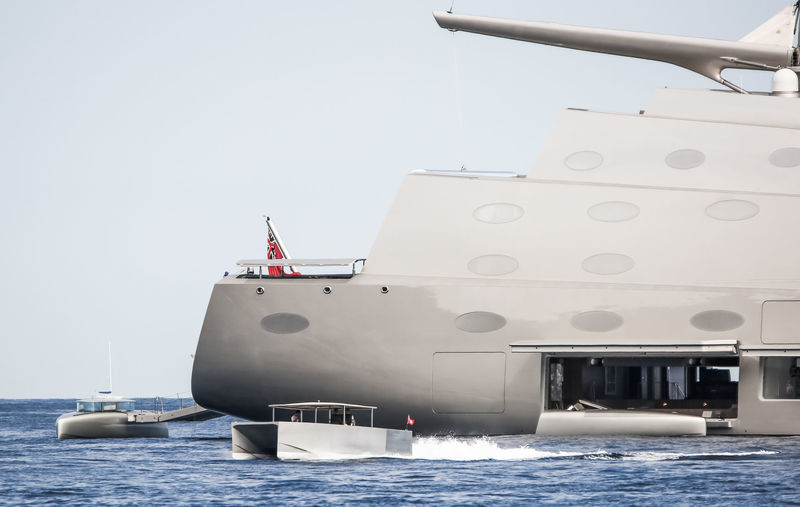 First up, SYA 1. Built as a high-speed craft, this 10.7-metre tender was inspired by speedboats from the 1930s and is made of carbon-fibre and other advanced composite materials. Fitted with two Yanmar diesel engines, SYA 1 can reach a top speed of 53 knots in smooth conditions. Considering that this tender was built exclusively for the use of the owner and his wife as a private escape boat or secret trips around the island, it is no surprise that there are few photos of her in action so far. 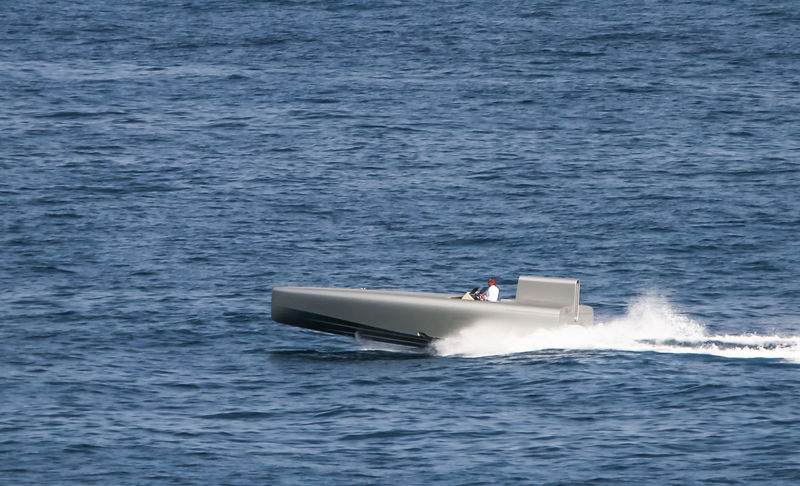 SYA 2 is a 10.7-metre enclosed limousine tender and operates as one of the two main guest tenders for Sailing Yacht A. Built from GRP, SYA 2 can house eight guests in a climate-controlled environment while two crew members operate her from the outside. Her ultra clean exterior design is only broken by a foldable transom door that acts as a swim platform with an attachable ladder. 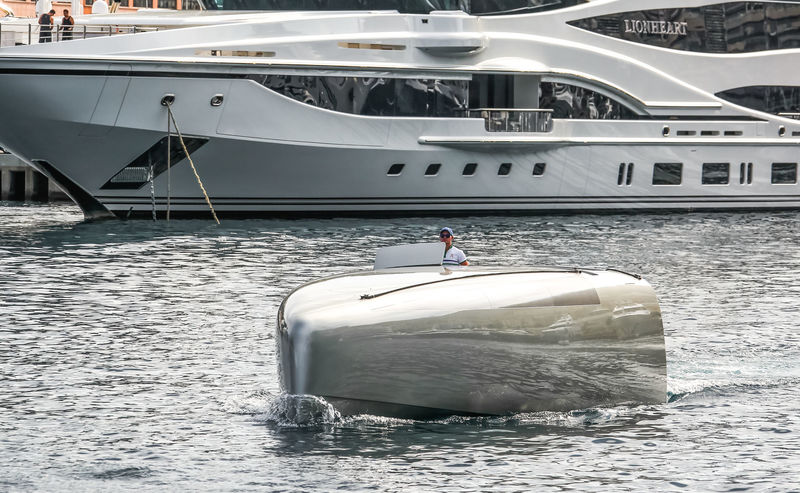 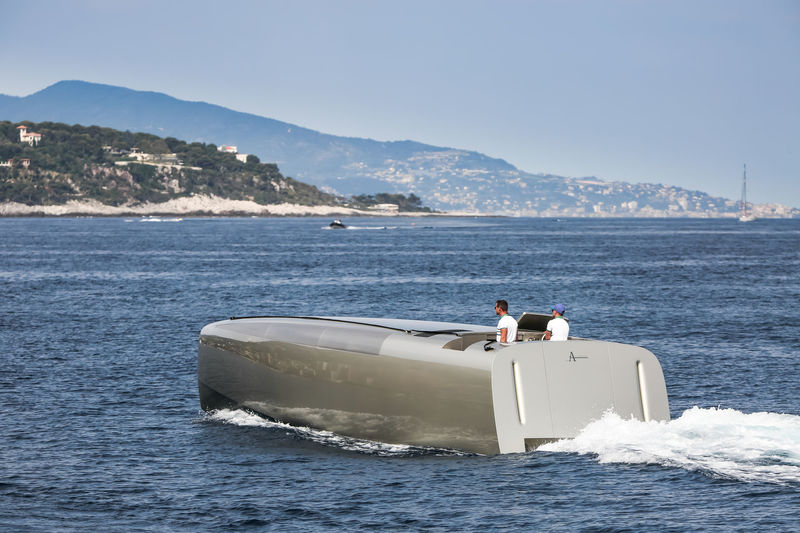 The third craft in the tender fleet, SYA 3, is an open version SYA 2 with a one-of-a-kind 360-degree capsule from where guests can peer out to the surroundings. A central station secures the hardtop and seals it with the glass but can be raised for a fresh air experience inside. Just as SYA 2, this one is fitted with a gyro stabiliser to keep things steady on the inside. 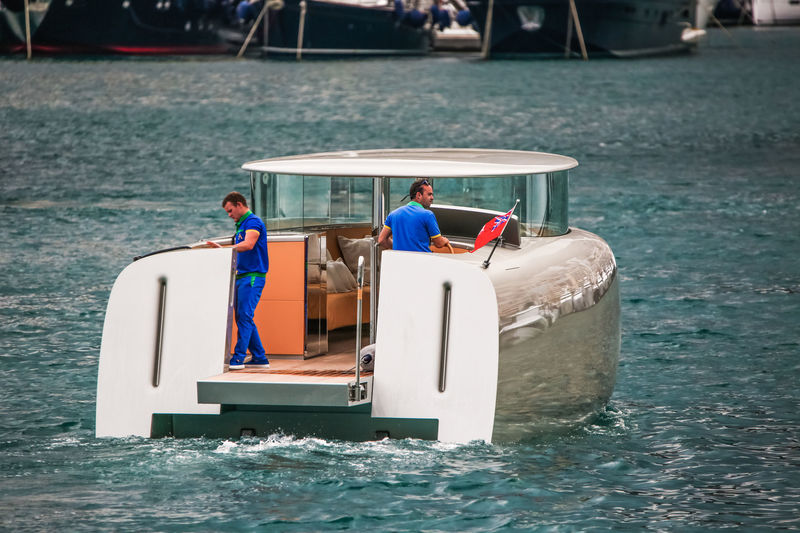 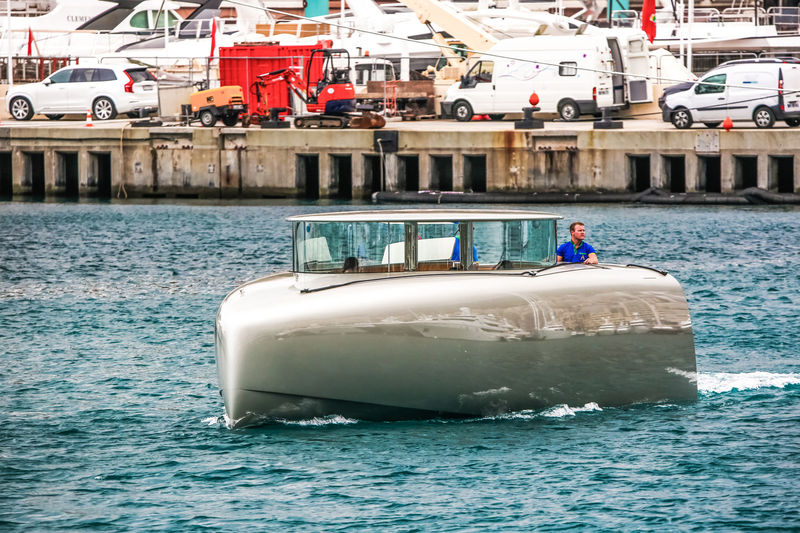 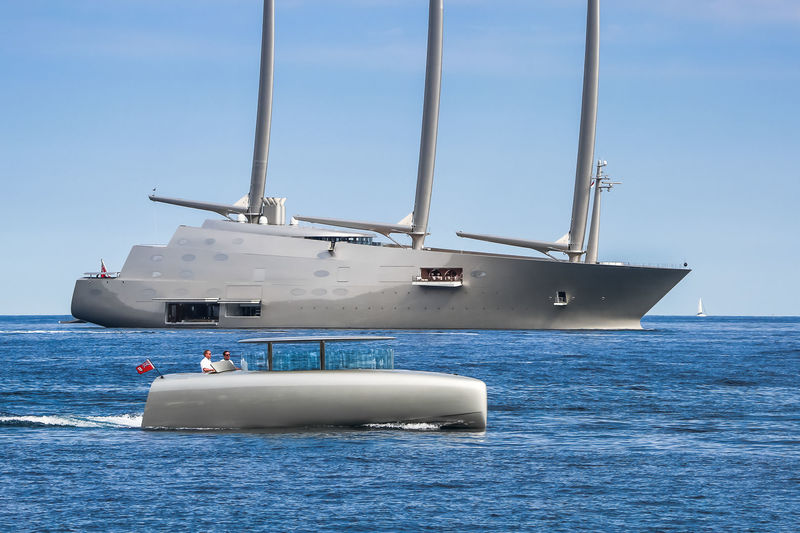 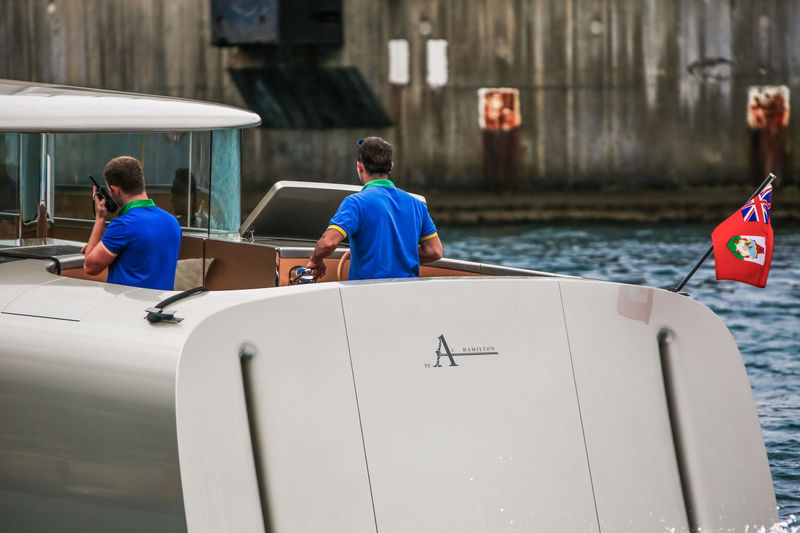 The final boat in the custom tender line up of Sailing Yacht A is the workhorse of the family, SYA 4. This 11.7-metre, 9.5-tonne, full-aluminium multihull tender is the pick-up truck of the fleet and designed by the yacht’s crew to simplify daily tasks such as trash removal, provision runs and crew transfers. A hydraulically-operated landing door in the bow and two jet drive motors allows her to access shallow beach landings with ease. Deck tie-down units across the teak deck allow her to safely carry a number of oddly-shaped cargo pieces. SYA 4 also doubles as a guest tender when needed. 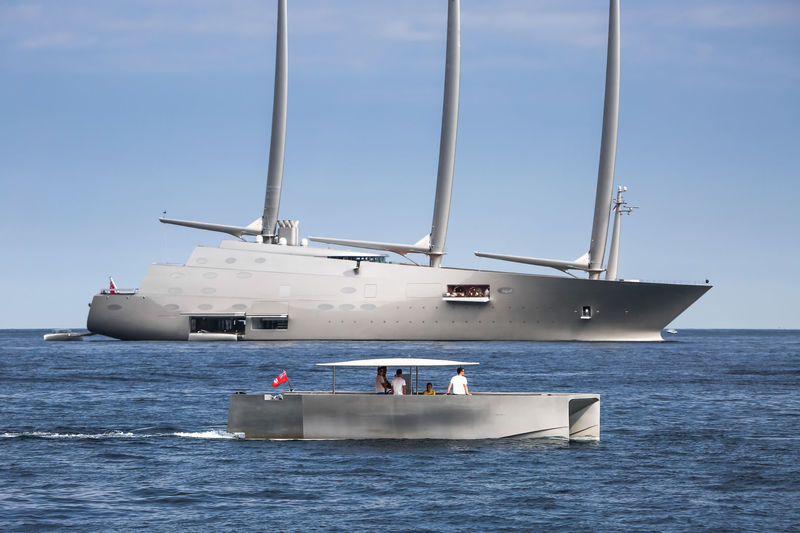 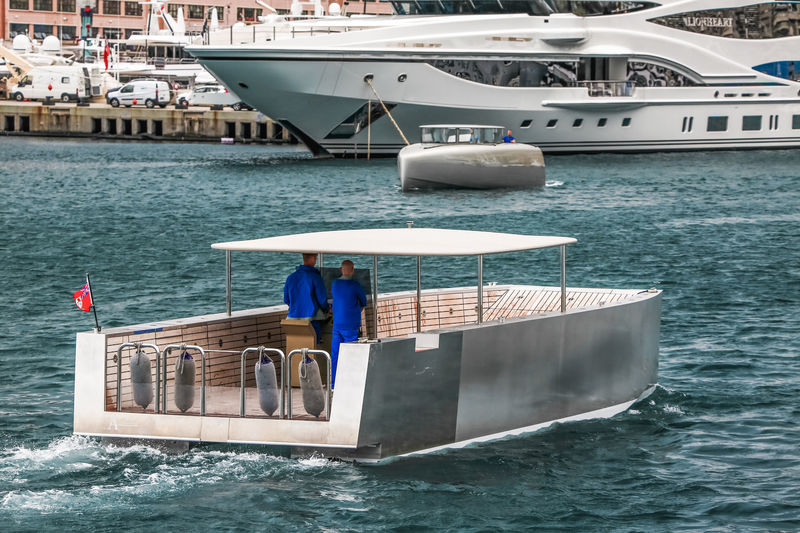 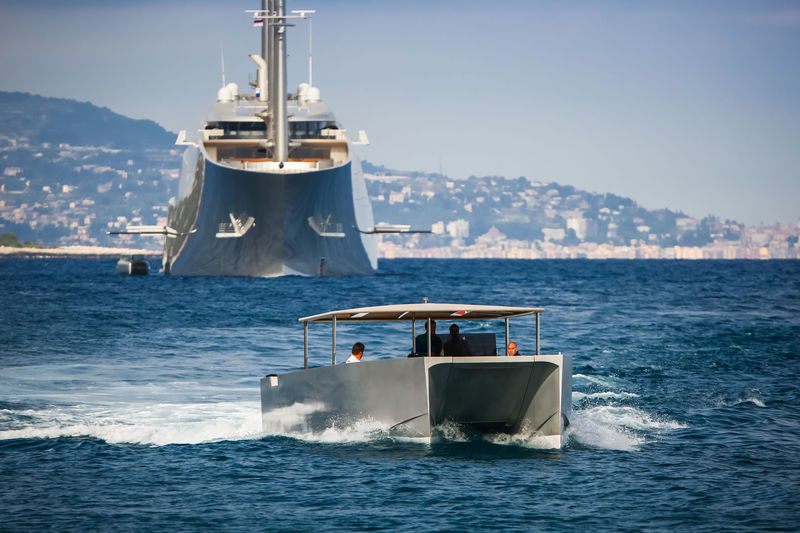 In Pictures: Motor and Sailing Yachts A side by side outside Monaco

Sailing Yacht A: The 143m superyacht in numbers