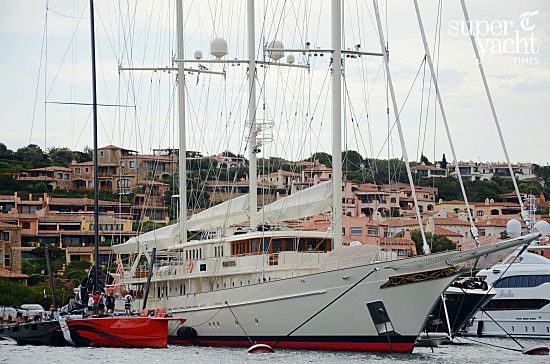 Seen here last month moored in Porto Cervo, Sardinia, is the second largest sailing yacht in the world, Athena, along with her owner’s maxi class racing yacht Comanche. Athena was built by Royal Huisman in 2004 to a design by Pieter Beeldsnijder Design, with naval architecture by Dykstra. Athena won’t hold on to her title as the second largest sailing yacht for much longer however, as the 142.8m Sailing Yacht A is expected to be delivered in 2016, followed by the 106m Solar. Athena’s owner, Jim Clark, is a passionate sailor and the two vessels can often be seen together at major sailing regattas. Here they were spotted preparing for the Maxi World Cup races held in Porto Cervo last month.