Wally has revealed its latest high-performance sailing sloop design at this year's Cannes Yachting Festival. As the first concept to be revealed by the company since joining the Ferretti Group in January this year, the yacht is in the final stages of the design process. Measuring 30.8 metres, the Wally 101 has a "new-generation hull shape" - as described by Wally - architecture by the German studio Judel / Vrolijk and an exterior design by the shipyard in collaboration with Pininfarina. The vessel would be an advanced composite sandwich construction in full pre-preg carbon and accommodate between six to 12 guests and four to six crewmembers. 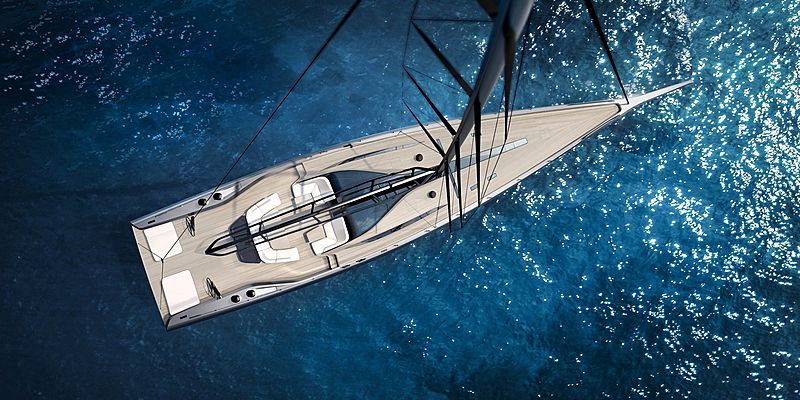 Photo: WallyThe semi-custom Wally 101 also introduces the Wally Magic Keel©, a brand new keel system from the shipyard. A contemporary design with a sleek profile, her low-slung deckhouse features a signature funnel-shaped glass roof which is combined with teak decking that blends into the foredeck. The large cockpit on board sailing yacht Wally 101 is designed with open-air living at the forefront. Wally 101 also features 50cm high bulwarks to ensure safety in both sailing and racing conditions.

Her cockpit can be personalised with furnishings including seating, tables and sun loungers - which can be removed for racing - and is protected by a dodger and awning. She would also feature a tender garage aft for a four-metre tender and have a sail area of 573 m2 upwind and 1,160 m2  downwind.

In addition, her deck and interior layouts are based on a flexible platform to suit to the requirements of different potential owners. The generous main salon can be combined with layouts for three to five cabins: either three cabins with three separate living zones; four cabins with two separate living zones; or a five-cabin layout. In all of the arrangements, the crew quarters are located aft and include two ensuite double cabins, as well as a dedicated navigation area. Furthermore, the raised salon on the Wally 101 sailing yacht allows more room for the engine room underneath. 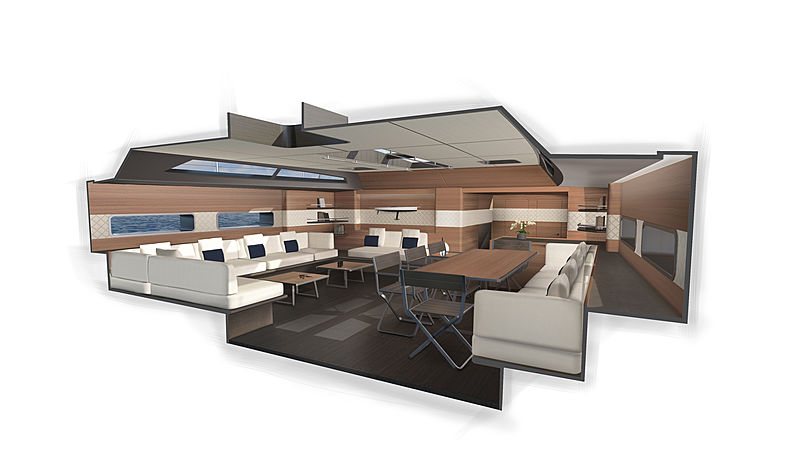 In terms of performance, the Wally 101 can reach an upwind speed of 12 knots in 12 knots of breeze (with 75-degree tack) and easily achieve 20 knots when sailing downwind.

"Ferretti Group is pushing on both souls of Wally: sailing and power. Wally has always set itself apart in the sailing world through its design but even further through its technological genius. The Wally Magic Keel© is a perfect example of this,” says Stefano De Vivo, Wally Managing Director.

The Wally Magic Keel© allows operators to vary the draft by more than two metres to enable optimal performance on the racecourse. Furthermore, using the system in the low draft position and enables ease of access to secluded anchorages when cruising, whether under sail or engine power. In case of grounding, the system also includes a dumping feature for added safety.

"Following the original spirit of Wally, the 101 is a yacht offering tremendous comfort inside and outside combined with swift performance while being simple and easy to sail,” comments Wally founder Luca Bassani. “For racing enthusiasts, the Wally 101 is a yacht optimised under the handicapping system to be highly competitive in corrected time. Additionally, the Wally Magic Keel© offers considerable advantages in terms of safety and interior flexibility”, he continues.