Southern Wind has announced that construction has commenced on the 29.24-metre sailing yacht Nyumba, at the builder’s facilities in Cape Town. Nyumba is the fourth hull of Southern Wind’s SW96 model and is the shipbuilder’s first yacht to feature a hybrid propulsion system.

Photo: Southern WindNyumba is being constructed for an experienced owner, who was looking for a high-performance and efficient yacht, capable of cruising worldwide. Additionally, the yacht’s owner was looking for a race-worthy yacht, in hopes of competing in superyacht regattas.

Photo: Southern WindThe sailing yacht’s exterior lines come from the drawing boards of Farr Yacht Design and sports a GT deck configuration, used previously on the newly launched SW105 GT yacht, Taniwha, conceived by Massimo Gino of Nauta Design. The designer commented, “The SW96 #04 deck design is the evolution of the successful GT deck concept, already applied on the newly launched SW105 GT “Taniwha” with several details that have been designed specifically to meet the owner’s requests. Clear, uncluttered deck equipment positioning allows for easy circulation on board and the mainsail track and steering positions are completely new. The GT styling makes everything look breath-taking in its simplicity and lightness.”

Photo: Southern WindThe high-performance sailing yacht will feature a full carbon hull, prepreg side and foredeck. Additionally, she will sport a lifting keel, twin rudder configuration as well as hydraulic winches. On board, Nyumba will feature three total staterooms, consisting of an owner’s staterooms to the fore and two guest staterooms amidships. Crew quarters are situated to the stern. 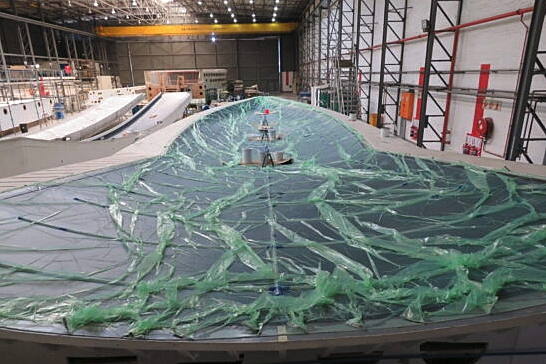 Photo: Southern WindHer main saloon and living space has been customised to the owner’s needs and in lieu of a fourth cabin, a TV and lounge area have been added. Nyumba, the Swahili word for ‘home’, is exactly how her owner plans to use her. She is expected to be delivered in the summer of 2022.