Amevi, a new 80m superyacht built by Oceanco at its Alblasserdam yard, has been equipped with an advanced NACOS 64-5 integrated navigation command bridge system and associated package equipment jointly supplied by Rotterdam-based SAM Electronics Nederland and Alewijnse of Nijmegen. 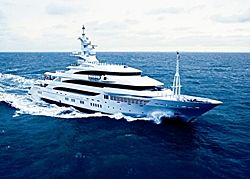 Featuring combined radar-based steering and track control as well as Ecdis functions and particularly high levels of fail-safe redundancy, the bridge system basically comprises dual Multipilot 1100 multifunction systems for radar, conning and electronic charting operations supported by a Trackpilot 1100 and a Chartpilot 1100 Ecdis for provision of planning, track and map data; secondary Chartpilot 1100 display units have also been fitted to the vessel’s tender bay and garage in addition to the owner and captain cabins.

Using a track ball-controlled monitor, a further key innovation is a facility for switching between conning displays and those of subsidiary systems such as navigation lights, deck lighting, windshield wipers and stabilisers.

The NACOS system is supported by a comprehensive range of navaid sensors and sub-assemblies which include a specially developed conning control unit for operation of navigation lights, bow and stern thruster, outside lighting and window wipers. Also supplied and fitted is an extensive series of GMDSS communications equipment with remote handsets together with Debeg SSAS (Ship Security Alert System), Epirb and SART units.

Project Y702, an 82m Oceanco superyacht, has been equipped also with a NACOS 64-5 system.

SAM Electronics’ NACOS bridge systems are currently in widespread service aboard commercial vessels and cruiseships and are now being increasingly sought by luxury yacht owners, configurations having recently been commissioned for other major newbuilding projects in Australia, Dubai, Germany and Singapore.