Italian shipyard Sanlorenzo has announced today that their inaugural explorer superyacht, the 42.4 metre 460Exp Moka, has completed her maiden voyage. Completed in 2015, she features exterior design from the renowned Francesco Paszkowski and was revealed at the latest edition of the Monaco Yacht Show. 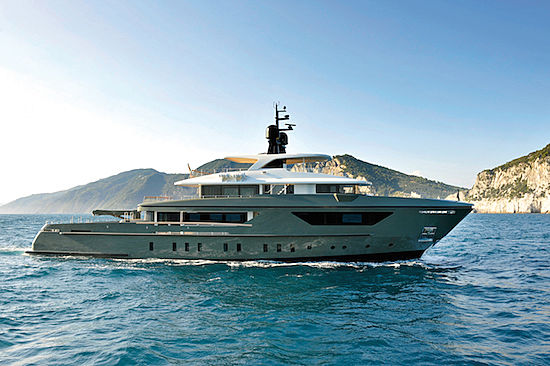 The voyage was a transatlantic journey that brought her to American shores where she was met by her new owner. Departing from Viareggio, Italy, on December 11th with her new crew of eight plus the captain, she first headed towards Palma de Mallorca before making her way to Saint Martin, arriving on January 6th. The very next day she was Florida bound, travelling 1,100 miles to arrive at West Palm Beach on 10th January.

Sanlorenzo comments on the success of Moka’s maiden voyage: “Following over 5,600 nm of navigation, a month at sea, of which 19 whole days of sailing at the average speed of 12.5 knots, Moka does not show any sign of wear and, moreover, she has not experienced any serious issue. The hull, equipment and machinery have not been affected in the least by the long navigation and unrelenting sea.”

Moka's layout, as requested by her owner, consists of five cabins and a gym on the lower deck, as well as a vast owner’s suite on the main deck and two salons on the main and upper deck. Designed for long range cruising, the 460Exp is powered by CAT C32 Acert engines which give her a cruising speed of 11 knots and a range of 4,000 nm.

Since her debut in Monaco, Sanlorenzo has sold five units of the 460 Explorer. Four units are currently under construction at the yard’s facilities.