Sanlorenzo has today announced the launch of the 29.1 metre superyacht, the first of six launches scheduled over the next two months from the Italian shipyard. She has been built for a repeat client of the brand, with the latest vessel named Blue Angel II marking the fourth Sanlorenzo yacht designed and built for same owner. 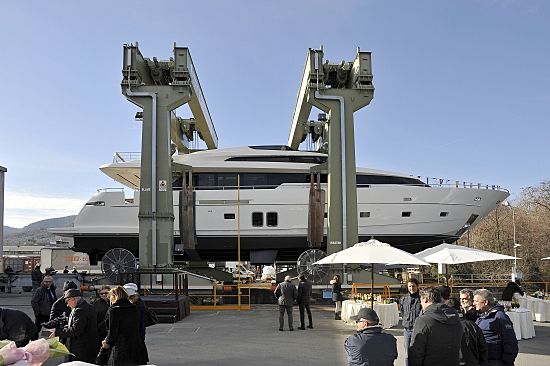 Part of the SL96 series, Blue Angel II features a traditional layout accommodating up to 10 guests in comfort and luxury. The large owner’s suite is found on the main deck, whilst four guest cabins are located on the lower deck.

One of her most innovative features is the ‘high-low system’ developed by the Sanlorenzo Technical Department. Located at the bow in the superstructure of the dining area and the owner’s cabin, the system slides up and down as required in order to enlarge windows and let more light in, all whilst ensuring the external lines of the vessel remain sleek and elegant.

Over the next few weeks, the shipyard will launch an additional two SL96 models, three SL106 vessel, and a new SL86, the latest model of the Sanlorenzo SL planing hull range. The Sanlorenzo SL was launched at Cannes last September, with 11 vessels already sold.