Sanlorenzo and Sundiro Holding, a Chinese Company listed on the Shenzen Stock Exchange market active in the production of Honda motorbikes on license, signed an agreement that will allow production of boats from 10 to 20 metres in China, as well as to sell on the Great China market (China, Hong Kong, Macao and Taiwan) yachts from 22 to 62 metres built in the three Italian Sanlorenzo production sites of La Spezia, Viareggio and Massa Carrara.

The joint venture between Sanlorenzo Spa and Sundiro Holding will lead to a capital increase of 30 million Euro, signed in part by Sundiro and in part by Sanlorenzo shareholders. This will not however change the Italian majority shareholding of the Company, that will remain in the hands of Massimo Perotti.

“The joint venture with Sundiro Holding – declares Massimo Perotti, Chairman Sanlorenzo Spa – represents a very innovative agreement for the entire international nautical market, in which Sanlorenzo, a long term icon of the Made in Italy luxury worldwide, signed a business partnership with an important Chinese group, keeping in Italy both the ownership and the production sites.”

Since its creation 15 years ago, Sundiro Holding has produced 18 million units of Honda motorbikes on license, with 4.700 employees and a turnover of around 2 billion Euro. 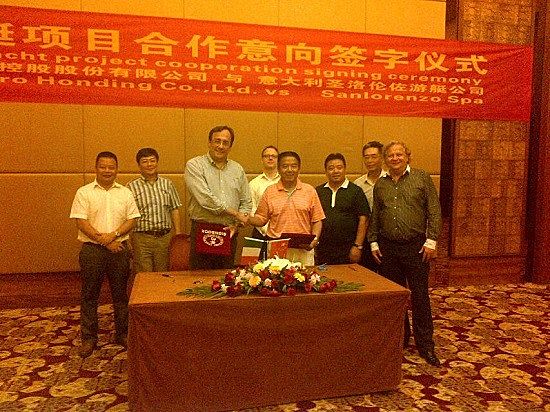 The agreement foresees a development in four steps:

1. A Chinese joint venture with Sundiro majority under the name Sundiro-Sanlorenzo Yacht Manufacturing Co., which will build yachts from 10 to 20 metres in China on the basis of Sanlorenzo design and under the brand “Sundiro”. “In this way, – continues Perotti – Sanlorenzo enters a market of smaller yachts that is now missing in our traditional range of products and which is absolutely not in competition with the actual models built in Italy, from 22 to 62 metres. The start up of this first phase will take approximately two years before seeing these new models cruising”.

2. The second step consists in a Italian joint venture with a Sanlorenzo majority under the name Sundiro-Sanlorenzo Yacht International Srl, an Italian company which will be aimed at distributing the Chinese-built boats to the world market

3. The third step is the creation of a Hong Kong based company called Sanlorenzo Hong Kong that will distribute the Italian-built Sanlorenzo yachts from 22 to 62 metres to the Great China market, through the Sundiro Holding’s organization. The agreement includes the purchase of stock boats from Italy to sell in the region. “The contract we signed – states Perotti – consists of a ten year agreement with a total target of 450 million Euro divided in annual sales targets”.

4. The final step is a capital increase of 30 million Euro

“At the end of the operation – says Perotti - my share of Sanlorenzo will be 55-56%, so that the company’s control, as well as the production, will remain in Italy. I will continue to be the Chairman and Fulvio Dodich the CEO of the company".

Thanks to this important agreement, Sanlorenzo strongly enters the Chinese market which is expected to reach 100.000 yachts by 2020 and debuts in the 10 to 20 metres yachting business, to compliment the model range.