The Volvo Penta IPS has come a long way since first being introduced in 2005, making its way from small day boats to the full-sized superyachts that it powers today. A project that embodies this innovation spirit better than any other is the new Sanlorenzo SX112 project that was recently unveiled. To find out what makes the IPS (Inboard Performance System) system so unique and how this technology can benefit larger yachts up to 40m, we caught up with Volvo Penta’s Yacht Segment Product Manager, Björn Rönnval.

As one of the largest superyachts operating with the IPS, Volvo Penta worked closely on the development of the SX112 with Sanlorenzo, who also utilised their propulsion know-how in the smaller SX76 and SX88 variants of this exciting new crossover line of yachts. The propulsion system was integral to the success of the SX112, of which four units are currently in build. Designed around an open-plan philosophy with minimal vertical separations, Sanlorenzo needed a propulsion solution that would deliver exceptional noise levels and help free up valuable space to pull off the ambitious panoramic beach club concept in the stern. 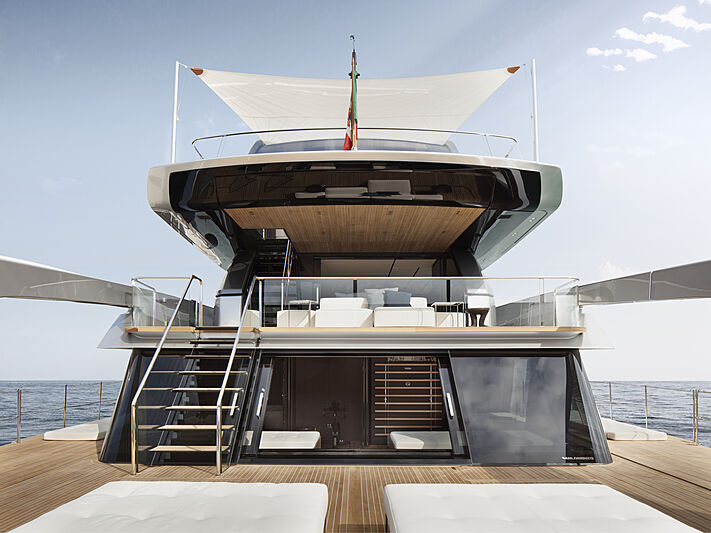 “We joined the project since the first concept was created, and helped the yard fine-tune the setup to maximise the performance and handling capabilities," recalls Rönnval. "We were involved all throughout the construction and sea trial phases to extract valuable figures for our database, which is used to continuously improve and adapt our models.”

Out of sight
“It is the combination of the IPS engine and the underwater pod that makes this such an efficient system,” explains Rönnvall. “Even though the D13 IPS 1350 is our most powerful engine in the IPS range, it still delivers excellent fuel efficiency while the hydrodynamic and propulsion characteristics of the IPS pod is incomparable to a conventional shaft installation.” Delivering a 30-35% more efficient output, this particular unit was designed for yachts up to 130-feet in length, delivers a top speed of 23 knots, and cruises with a consumption of 120 litres per hour at 10 knots for long-range voyages. 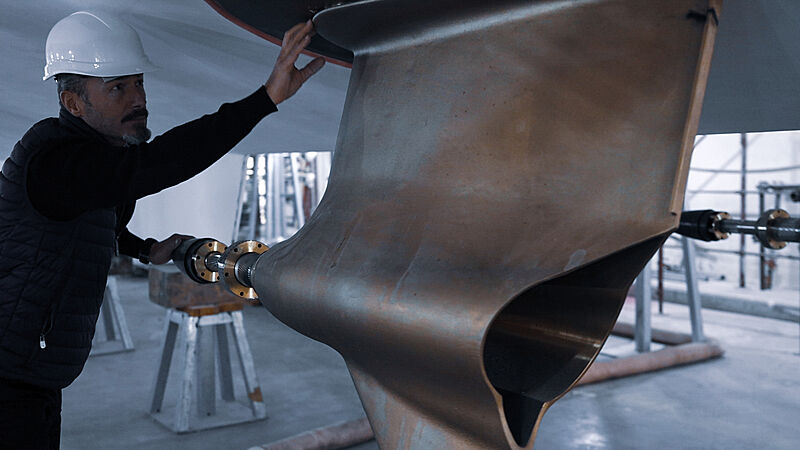 Photo: SuperYacht TimesThis efficiency comes partly from the design of the IPS pod. This forward-facing unit turns two counter-rotating propellers at its leading edge which can operate in cleaner water and produces less cavitation as a result. As the pods are perpendicular to the hull, the thrust produced by the propellers is linearly expelled for maximum efficiency, compared to shaft drives which are angled downwards. Throttle inputs are therefore also more immediate and intuitive.

Less is more
As Rönnvall explains, the exceptional efficiency of the IPS not only results in fewer emissions and lower fuel consumption: “These benefits mean that we can downsize the total installed power in the yacht, while still receiving the same performance. As a result, less fuel is needed on board which lowers the overall weight and further improves the performance.” As the engines are smaller and require less fuel, a subsequent smaller engine room and technical spaces compared to similar-sized yachts running with shaft installations frees up valuable space to the guest areas on board. 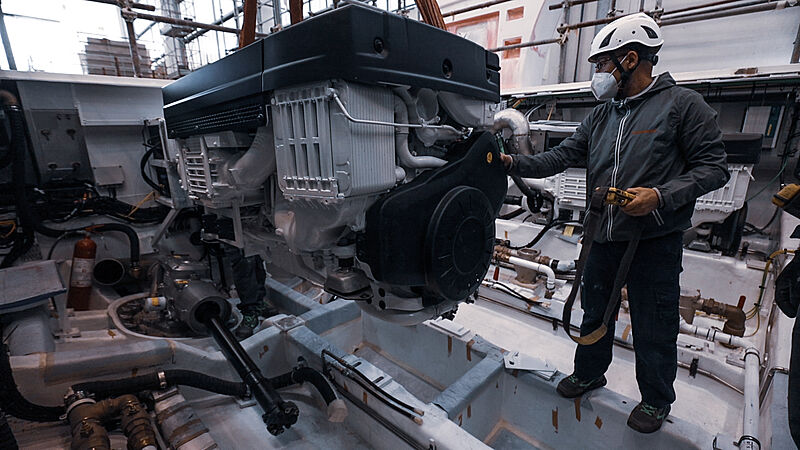 Photo: SuperYacht TimesGuests will notice a significant improvement in the overall comfort on board thanks to the low noise and vibration levels (up to 50% less) that have become synonymous with the IPS. “As no thrust forces are returned into the engine as on traditional in-line setups, the IPS engines can be installed on softer mounts, eliminating even more vibrations at the source,” says Rönnvall. This was a key factor in the design of all SX models by Sanlorenzo, as accommodation on all three models is located on the lower deck, with the all-important master suite virtually adjacent to the engine room. 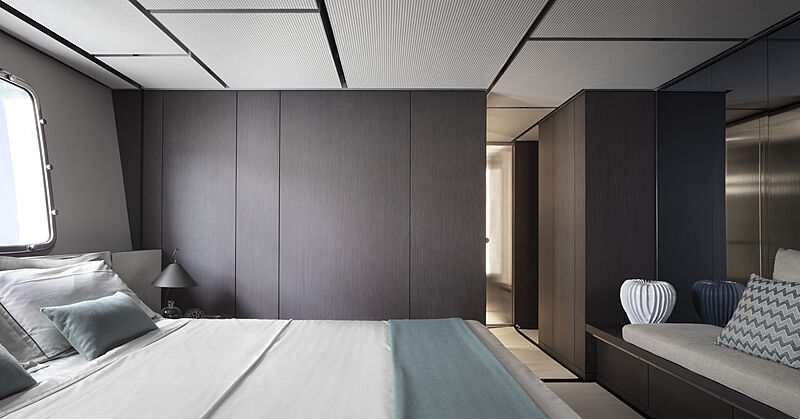 Photo: Thomas PaganiGo for green
Sustainability and environmental causes have always been integral to the Volvo Penta story, which is why the company has invested in making its product as efficient as possible. Volvo Penta is making use of today’s existing technology to offer the market the cleanest option available, characterised by 30% fewer NOx emissions and class-leading fuel consumption. Ahead of market demand, Volvo Penta’s recently-unveiled IMO Tier III-rated solution raises the bar even further in terms of emission standards. A built-in Selective Catalytic Reduction exhaust treatment system also acts as a silencer, reducing noise by 35-40 dBA. 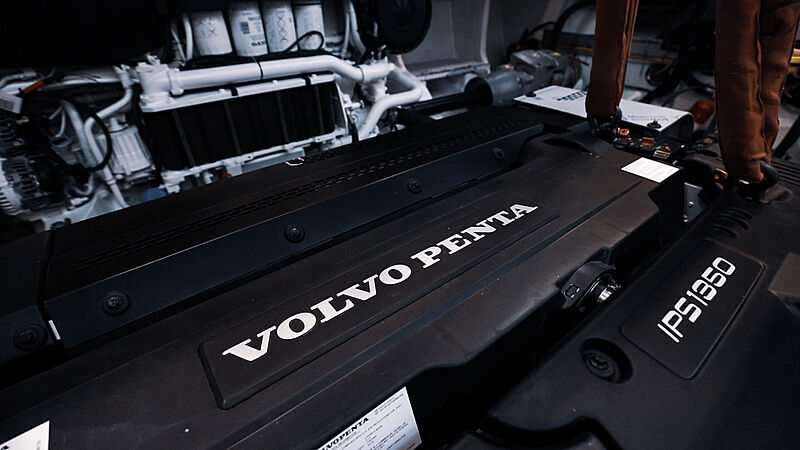 Photo: SuperYacht TimesA solution already in place that comes as standard in its engines is the ability to use hydro-treated vegetable oil (HVO). Used as a blend with diesel or neat, this renewable source of fuel is said to deliver up to 90% fewer CO2 emissions depending on the type of HVO used.

Down to a T
Perhaps the most obvious benefit the IPS system is best known for is its intuitive handling characteristics. Volvo Penta has managed to replicate the pin-point accuracy that this system provides to smaller boats and introduce it to the larger yacht segment with the SX112. The famous joystick function allows captains and self-driving owners to confidently manoeuvre the vessel in tight ports and anchorages by simply rotating and pointing the joystick in the direction needed to go. Docking mode links the joystick with the bow thruster to give the captain full control of the vessel while a dynamic positioning system comes in handy when having to stand by in port or during emergency situations on board. 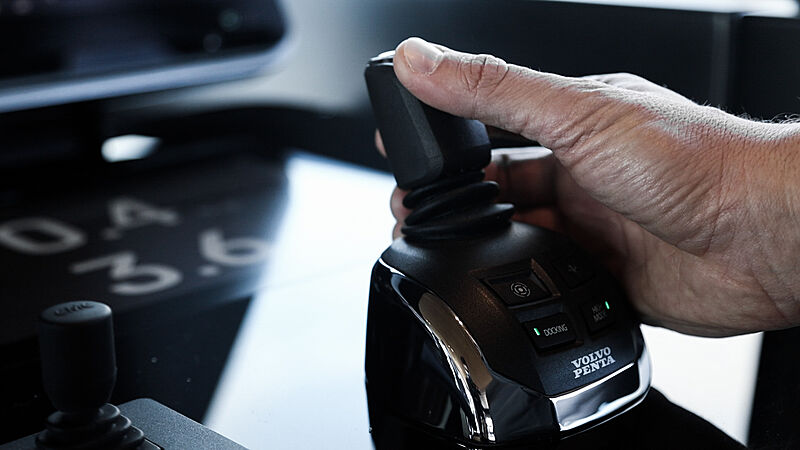 Photo: SuperYacht TimesWhen it comes to cruising, users will notice several key advantages thanks to the IPS’s dynamics. The torque produced by the engines creates an impressive acceleration and once underway, the forward-facing pods make changing direction more predictable and instantaneous, not to mention a far smaller turning circle compared to conventional propulsion systems. The system’s functions are displayed through the Electronic Vessel Control (EVC) which monitors main controls such as pod steering, dynamic positioning and joystick inputs.

Photo: SuperYacht TimesAt your service
As one of the world’s leading diesel engine producers, Volvo Penta commands a global network of service agents and customer care representatives. Given the group’s varied commercial portfolio with operations around the world, users can rest assured that maintaining their IPS systems will be hassle-free. “As this is a high-volume engine, spare parts are readily available and are backed up by the good aftermarket support which we are known for,” confirms Rönnvall. 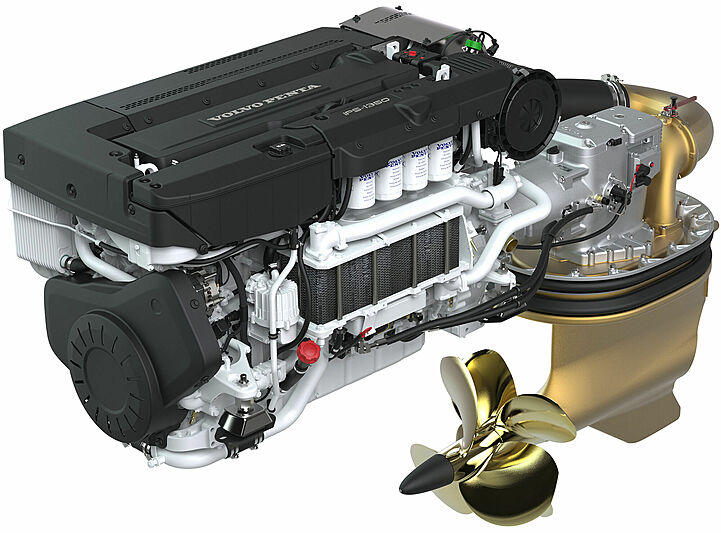