On May 19th 2013, the schooner Tara embarked on a new scientific adventure: The Oceans Polar Circle expedition. Tara will travel 25 000 ams around the Arctic Ocean via the Northeast and Northwest passages, returning to Lorient in December 2013. 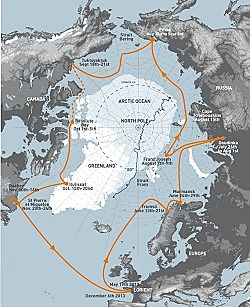 The new challenge brings together biologists and oceanographers to focus on plankton biodiversity in the Arctic. Research will be conducted at the edge of the ice pacha where plankton is most abundant. Circumnavigating the Arctic Ocean, Tara Oceans Polar Circle will complete the main objective of the Tara Oceans Expedition (2009-2012): to collect plankton in all the oceans of the world. Indeed, the Arctic is the only ocean missing form our global study of plankton. Other issues will also be explored: the assessment of mercury levels in the atmosphere and in the sea,, and the concentration of plastic particles. Our aim is to obtain new measurements of these pollutants in the Arctic, and better assess their impact on the arctic ecosystem.

Extreme conditions
Tara will be sailing in an environment where natural conditions are difficult. Although the period of thaw lengthens every year, time is short before the ice closes in between the Northeast and Northwest passages, leaving little room for improvisation.

Beyond the Arctic Circle, temperatures vary between -10 ° C and +5 ° C in summer. Daylight will constant in the Russian Arctic (midnight sun) and then gradually diminish to 12 hours per day in September. The context

The Arctic region is subjected to the efforts of accelerated climate change more intensely than anywhere else, as evidenced by the rapid melting of the ice pack in summer. This unique and fragile environment is increasingly coveted for its minerals and other riches, and is a key area for understanding climate change on the planet.

Summary of the scientific mission
- Comparison of biological data on plankton and their physicochemical environment in the Arctic with the data collected in other oceans
- Study of floating plastic, and mercury (dissolved and atmospheric) present in the Arctic.
- Study of the "coolr" of the ocean, its composition and surface pigment particles.
- Specific study of spring phytoplankton blooms at the ice pack's edge.