Scorpion RIBs (Rigid Inflatable Boats), based in Lymington, Hampshire, is a fine example of a British company producing a first class product using British design, British craftsmen and British manufacturing skills. The brand is already recognised for setting all the industry standards producing high-end, bespoke luxury cruising and performance RIBs. However, a Scorpion RIB was, until now, out of reach of most RIB enthusiasts. 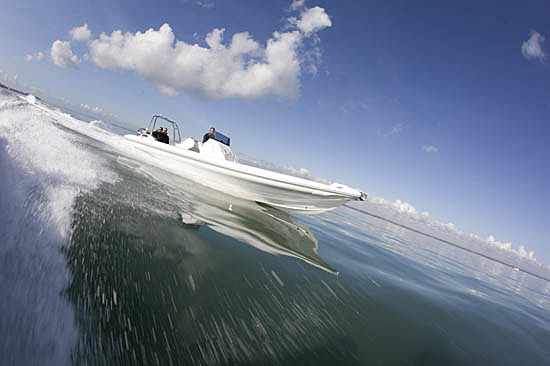 That’s all changing now as a result of the commitment and business acumen being invested by its new owner into the company’s long term growth. This new confidence combined with a subtle marketing and brand building exercise is helping to shift perception and also starting to attract more overseas buyers whilst also having a positive effect on home market sales.

The company’s order book is full through to October, with a mix of models being built to order ranging from the £200,000 Sting, the exquisite 10 metre cabin RIB, to a brand new and more widely affordable 6.5 metre sporty open RIB starting at £35,000. Orders for new boats are coming in from as far afield as the Philippines and the Caribbean.

One of the reasons for this increased level of interest at a time when many firms are being forced to close their doors forever or reducing staff levels is that the company’s new owner and hands-on M.D., Patrick Byrne, is a huge supporter and devotee of RIBs and their immense capabilities.

“I knew and trusted the calibre of these boats long before I got involved with the business, having cruised extensively and also done some racing in Scorpions over a number of years. It’s all about making the very best product you can and we’re focusing everything on building and delivering the very best there is. One of my roles is to expand on the excellent brand loyalty that Scorpion already enjoys by introducing our credentials and our boats to a wider public,” states Patrick.

The 6.5m has primarily been launched as Scorpion’s first production model to entice a whole new audience into Scorpion’s embrace. As Patrick Byrne says, “By bringing a 6.5m at £35k into the arena, owning a Scorpion suddenly becomes more affordable and easier to justify.”

It doesn’t stop there though. The high-end luxury market is another obvious arena for Scorpion to further expand its business. This brand is a natural fit for superyacht captains who are ‘shopping’ for the best-looking and best-performing tenders and runabouts, and of course there’s the ‘toys for the boys’ angle as well.

The Scorpion range delivers on all fronts and its boats will be making an impact in all the right places this summer. Partnerships are already in place for providing the official press boats supporting the Dubois Cup (6-8 June) www.theduboiscup.com and the Loro Piana Superyacht Regatta (9-13 June), hosted by the exclusive Yacht Club Costa Smeralda, www.loropianasuperyachtregatta.com and Scorpion is also likely to be putting in an appearance at the Monaco Yacht Show in September.

To support the more immediate expansion plans as well as gearing itself up for longer-term growth, Scorpion has expanded into Palma, Mallorca offering a sales, service and storage facility for Scorpion RIBs in the Western Mediterranean covering Spain, France, Portugal and Monaco.

Back in the UK, Scorpion has recently increased its workforce by 10% and has moved its tube shop to a much larger but still local industrial unit.

As part of the Government’s Apprenticeship Expansion Programme, Scorpion RIBs has also joined a consortium led by Lymington-based company Berthon to provide an apprenticeship scheme. Patrick Byrne is totally committed to ensuring that the Scorpion brand stands for all the best things about British produced boats. “It’s a change in philosophy for the company to look at the longer term and a commitment to training and we are looking forward to taking on our first local apprentice next month, training him in RIB construction,” he commented.

If you’re in the market for a RIB, Scorpion is exhibiting the new 6.5m and an 8.5m RIB at this year’s Southampton Boat Show from 11-20 September.