Superyacht Banyan, a beautiful 31 metre Palmer Johnson, has undergone many changes since her 1980 commissioning. In 2009, she was extended 4.3 metre, repowered and completely refurbished, transforming her into a virtually new yacht. Recently she added twin M7000A Seakeeper gyros, greatly enhancing onboard comfort and stability without sacrificing cruising performance. Banyan can now travel confidently in bigger seas and to remote anchorages for her owner and charter guests. 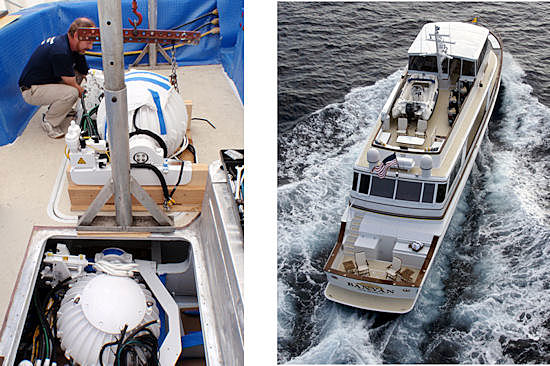 In the search for zero-speed stability, many factors came into play. The owner was very conscious of ambient noise onboard, so a new system needed to be quiet. Banyan's twin 33 kW Northern Lights gen-sets were serving well, but amperage draw needed to be conservative. And, after Banyan's extension, Captain Andrew Grego said the yacht gained speed and fuel efficiency. With the 875 hp C18 CAT turbo diesel pushing top speeds of 22 knots, and 14.5 knots at 20.41 km/l at cruise, "Hydrodynamics were a big issue. We didn't want to add anything below the waterline that could reduce the efficiency or alter the boat's handling," he said.

Though the yacht already had stabilising fins for use underway, zero-speed fins were ruled out in favor of the Seakeeper gyros. Mike Koller of Atlantic Marine Power Systems, which installed the gyros, said with the higher power draw of zero-speed fins, "The owner would have had to upgrade his gen-sets and the hull structure, which would be time-consuming and expensive."

Capt. Grego added, "Seakeeper required just a simple wire run. It's almost no amperage draw on the boat at all when the gyros are spooled up." He noted the gyros were more cost-effective, easier to install and, "Everything else on Banyan was first-rate technology. We thought the Seakeeper gyros provided more modern technology than a fin system."

The two Seakeeper M7000A gyros combined produce an impressive 14,000 newton metre seconds of angular momentum, with each using a flywheel operating inside a vacuum. This aerospace-inspired technology creates powerful righting forces whether a craft is underway, at low speed or at anchor. Each unit draws only 1,500-2,000 watts at full operation.

One nagging problem from Banyan's extension was that the boat had more buoyancy aft than desired. Installing the Seakeeper units under the aft cockpit created an additional value by helping level the yacht.

In the end, the gyros delivered a quiet, low-power and effective solution for Banyan with multiple benefits. "The gyros not only assisted our existing stabiliser system, but also gave us the at-anchor stability, and got rid of the aft buoyancy," said Capt. Grego. "The benefits were, I think, actually better than a similar fin system.

"After a run to the BVI," he continued, "it was obvious the gyros definitely make a difference. At anchor, the system dampens roll by 73%, which is pretty considerable." And, the Seakeeper units worked well with Banyan's existing fins while underway. "The gyros also allow us to venture into bigger seas," he said. "We recently cruised 57 hours straight in 2.7-3.6 metre swells the entire way, and it was comfortable. Ordinarily I would have thought, 'I'm not doing that.'

"I definitely see a trend toward more vessels, whether new builds or retrofits, opting for zero-speed stabilisation. This is especially true regarding smaller vessels that now have a greater range and the ability to travel to remote areas. From the standpoint of delivering safety and stability, adding at-anchor stabilisation is almost a necessity among owners and prospective charter clients. For a 31 metre boat like Banyan to have zero-speed stability is a good marketing tool for charters."

Capt. Grego was happy with the retrofit process. "It worked out really well. Seakeeper and Atlantic Marine did their homework for our application, not only as a retrofit, but placing the two gyros side by side." While the gyros were installed, Banyan's hull was also sandblasted and repainted. "Because of the low impact of the Seakeeper install, I could do two major jobs at once without any issues," he said.

"The Seakeeper people are great and their engineering team is fantastic. They were especially helpful on the Banyan project, as we were on a really tight deadline with the boat going out for charter afterwards," said Koller. "The retrofit gave the boat new life."

Accommodating up to eight guests, Banyan cruises the Bahamas, Caribbean, U.S. East Coast, Newfoundland and Nova Scotia. The completely refurbished yacht includes a new cockpit, lazarette storage area and BBQ. She offers an extensive array of electronics and entertainment in a luxurious setting, as well as snorkeling and fishing gear, Vespas and water toys.