Following closely in the wake of Fast Yacht Support (FYS) vessel Garçon’s successful appearance at the Monaco Yacht Show, Amels announces the sale of another 67-metre Sea Axe, with some interesting custom features. 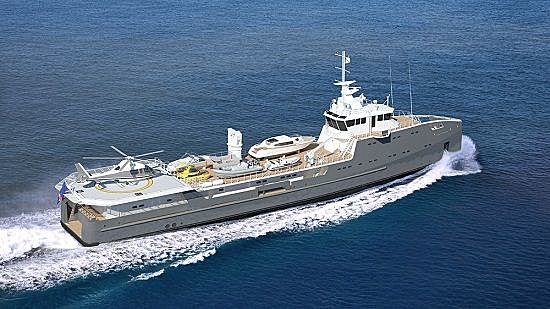 The Damen-built Sea Axe 6711, a 67-metre Fast Yacht Support vessel, is due for delivery in spring 2014. It will bear many similarities to Garçon, the Sea Axe 6711 which made an impressive appearance in Monaco earlier in the year, although there are some striking differences too.

In co-operation with Imperial, a yacht management company which is known by its portfolio of prestigious superyachts build under its supervision, this latest Sea Axe is being constructed with an extensive dive area, designed specifically for scuba diving expeditions. The platform is also being equipped with a LY2 certified helipad, with a maximum take-off load of 5,000kg and a D value (diameter) of 14. This makes the helipad sufficient to accommodate a Eurocopter Dauphin or Agusta Grand, for example.

The working deck will be equipped with a crane with a maximum working load of 6.6 tons at a reach of 16.6 metres. Put simply, the crane is strong enough to safely manoeuvre a large tender such as a 12 metre J Craft Torpedo weighing 11 tons.

Managing director Rob Luijendijk commented: “One of the things that owners and captains noted about Garçon at the Monaco Yacht Show was the potential dual-purpose of a vessel like the Sea Axe. They can see the potential as a support ship to a superyacht, particularly the opportunity to win back valuable luxury space on the mothership, because much larger tenders and a greater selection of watertoys can be stowed with ease on the Sea Axe. But some are also excited by the concept of owning a high-performance expedition vessel, and the decision to fit a customised scuba diving centre on this latest Sea Axe 6711 project is an example of how versatile this kind of vessel can be.

“We are pleased to be working on delivering this project with our partners at Imperial, with whom we have built up an excellent relationship after many shared superyacht projects. With her superyacht paint finish, Bolidt teak and several luxury areas including the bridge and the Beach Club, the Sea Axe is very much at home in the world of superyachting - even if her primary function is as a high-performance support vessel.”

Aside from her striking and purposeful appearance, the Axe bow is what really sets the Sea Axe apart from others in the world of support vessels. The unique bow and underwater body shape enable the SEA AXE to reach speeds between 18-25 knots in all sea states, making this a fast and dependable support ship - whatever the weather.