The Abu Dhabi Yacht Show (ADYS) will return from the 25th to 27th February 2010 at the Abu Dhabi National Exhibition Centre and Marina (ADNEC). There will be considerably more exhibition space and several changes in format for the second edition, enabling the organisers to showcase many more world-famous brands of superyachts even more effectively to the thousands of high net-worth visitors expected. 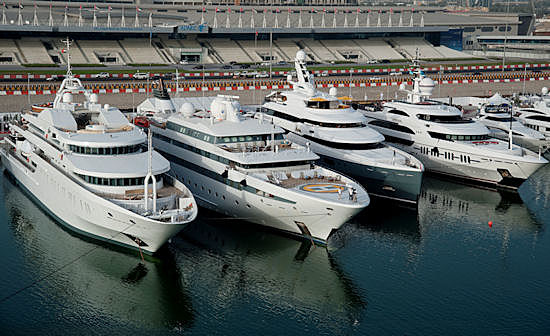 The 2009 inaugural event saw sales of vessels totaling over US$200 million (AED 735 million), confirming the growing importance of Abu Dhabi as a leading superyacht destination, and establishing ADYS as the best event in the Middle East region for viewing the world’s largest and most exclusive private yachts. The show is organized by Informa Yacht Group (IYG), promoters of the world’s leading yachting events, whose portfolio includes the world-leading Monaco Yacht Show and Superyacht Cup Regattas, which have been running for 19 years and 12 years respectively.

“ADYS is returning in early 2010 with a fresh look and a new format,” says Franck Dailles, Group Director. “We have experienced even greater demand from exhibitors for the second edition of the show, and we shall require more space for the 150 or more exhibitors. We expect to showcase many breath-taking models once again and display the industry’s latest products and services even more effectively. The yachts will all be in the water with the exhibition stands immediately alongside the marina. ADYS 2010 is definitely going to be an unforgettable event to visit and at which to do business.”

ADYS was created to meet the needs of the rapidly growing Middle East yachting market, as well as the nascent market in South East Asia and beyond. Bringing together some of world’s leading shipyards, and an important number of service and supply companies, brokers, interior designers, consultants, and marina developers, ADYS 2010 will offer a comprehensive overview of the latest luxury yacht products and technological innovations.

Andy Treadwell, Managing Director of Informa Yacht Group says that the Gulf region is one of the most promising markets for continued growth in luxury products: “There are very strong indicators for expansion in the Gulf's yachting sector, including the billions of dollars being invested to provide berthing space on reclamation projects and the increase in export of yachts from the United States and Europe. We see this trend continuing for years to come.” There are currently about 9,000 berths in the six GCC member states, with plans to build another 7,000 by 2012 according to Emirates Business 24/7.

As well as showcasing some of the world’s most exclusive yachts to an important new potential customer base, ADYS 2010 will offer great networking opportunities with a packed program of prestigious events including a Charity Gala Dinner, a golf tournament, and various glamorous parties. ADYS 2009 saw more than 100 companies exhibiting and featured a flotilla of 23 superyachts.