While the Admiral 54 Sea Force One, the first 54 metre megayacht built by AMY, continues to receive great appreciation worldwide, her 54 metre sister ship is under construction at the Genoa facilities. 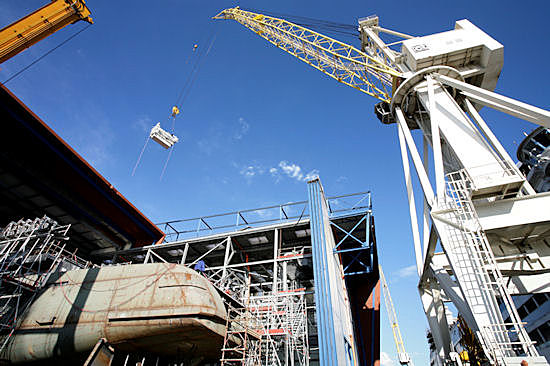 The high resistance steel hull and the light alloy aluminium superstructures are already completed. In projecting and building all parts, particular attention was given to ensuring as few deformations as possible during welding; results were excellent and allowed for a reduced usage of filler and time spent painting. The two Caterpillar 3516B engines are already on board and work continues on the engine room, of which the lay-out was optimized during the project stages.

Designed by Luca Dini and built by AMY, the superyacht has a sleek and imposing silhouette, without the lateral rounding off of the superstructure as seen in the number one. Three hydraulic doors, one on the main deck and two on the owner’s cabin, open up to create balconies.

Other distinctive characteristics include the stern hatch which opens as a platform over the sea, offering guests a sunbathing or fitness area; the garage which holds the tender on one side, equipped with a crane for loading and launching; and the central mast which increases space on the sun deck. 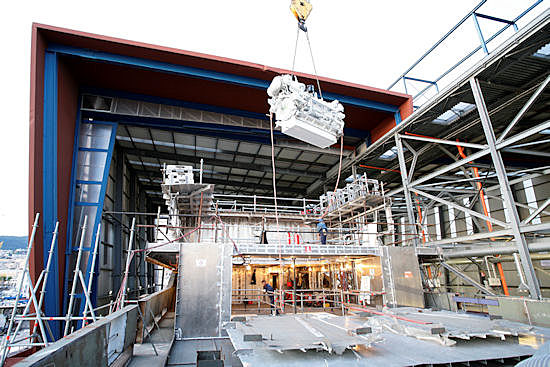 Special attention has been paid to soundproofing and noise reduction. The two Caterpillar engines power the Admiral 54 up to 17.5 knots and she has a range of around 5,000 nautical miles at economical speeds.

The Admiral 54 obtained the RINA International Certifications and the new RINA Green Star Certification, which assures compliance with the strictest regulations in terms of environmental protection, whilst in no way compromising on the freedom of navigation.

Delivery is scheduled for the of Summer 2010.