With a forecast that lay to the light side of reality, in a rapidly building westerly the Oyster fleet named its choice of sails, white or downwind, and headed for the Royal Yacht Squadron start line on this second day of racing in the Oyster Regatta in Cowes.

By the time the 18 yachts, from the Oyster 41 to the Oyster 82, crossed the finish off Portsmouth’s Spit Sand Fort after chasing a course woven back and forth through the eastern end of the Solent in preparation for a fabulous post-race supper aboard HMS Warrior, they’d sailed not just a good race but through rolling squalls topping 35 knots and everything from brutally sharpened double density rain to hail, thunder and lightning. An English summer’s day so perfectly described on Oyster 56 Asante as The Tempest! 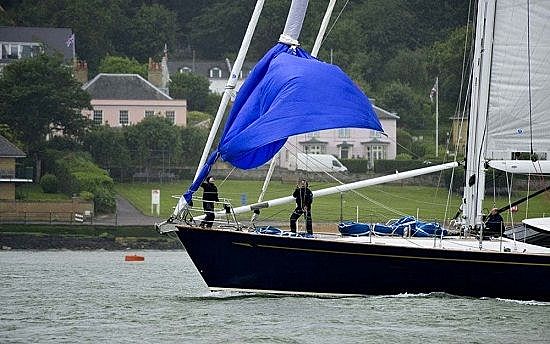 That sentiment was not unique. “I’ve never sailed in anything like this before,” says newcomer to British sailing Richard Smith of 655 Sotto Vento, with a grin a mile wide. Even ocean racer Campbell Field, skippering the Oyster 82 Starry Night of the Caribbean, commented, “I’ve never seen this in a July Solent before”. There was a little damage but only slight, a handful of halyards, sheets and a couple of bits of hardware, but that the fleet worked the course in such conditions so well shows the sure footing and safe seakeeping in-built in these Oyster yachts.

Before the fleet knew what was coming their way, the tactical choice today was very different to the day before. The course was much more downwind, which ironically caused more to choose white sails than downwind so they could goose wing and cover more distance running square rather than three-quarters. In Class 2 eight of the ten yachts took this route, but in Class 1 most opted for downwind sails. Some just wanting to test their colour sail carrying capabilities. And it was certainly challenging with big wind shifts in a drenching black cloud and squally breeze gusting anywhere between 15 and upper mid-30 knots. The results in these tough conditions were really interesting.

After nearly three hours racing, on corrected time, five boats came in within five minutes of each other and there were only 14 minutes between the ten Oysters in Class 2. Nick and Dee Flower’s 45 Kite Runner, taking first, Aidan Millerick’s 46 Astraeus of Mersea, second, Peter Morris’s 49 Tenens Spirit third, and Simon Timm’s 53 Nutcracker, 4th.

Nick Flower described his team’s race on Kite Runner, his first keel boat bought just three years ago as, “All good… just wet!” Before carving their own way they got a good second over the line behind Peter Martin’s 45 Little Morton which he always sails the regattas with his soon to be 84-year-old mother Elisa on board, today’s ‘Tempest’ being no exception. And as Nick on Kite Runner recounted while they headed back into another wild beat, they passed Little Morton with tea being served in the cockpit just prior to the gybe mark!

Kite Runner was one who popped a sheet, forcing a tack off the island shore, which actually proved beneficial, gaining them ground on a cluster including the 49 Tenens Spirit. The two kite flyers (SJ41, Prince de Petarcq and 53 Spirit of Epsilon) were still way ahead but with a bit of a tidal gate at the next windward mark, Kite Runner closed on Astraeus but after that Astraeus took off, however giving time, finished second to Kite Runner’s first on corrected.

In Class 1, there was a bigger spread with 19 minutes separating boats, and a couple of retirements. There was a real teeth-bared duel going on out front though between 82 Starry Night and 655 Sotto Vento after Starry Night, unhappy with depth, tacked early out of the mainland shore back to Norris, losing to the tide and also being headed. Sotto Vento held on, enjoyed the lift and pulled a lead out after the bank, which she held almost to the very end with Starry Night only just taking her out with 10 seconds between them, crossing the line as a 28-knot squall came through, the pair boldly hanging on to their spinnakers. A brave call, particularly as fast approaching the fort they were quickly running out of water! 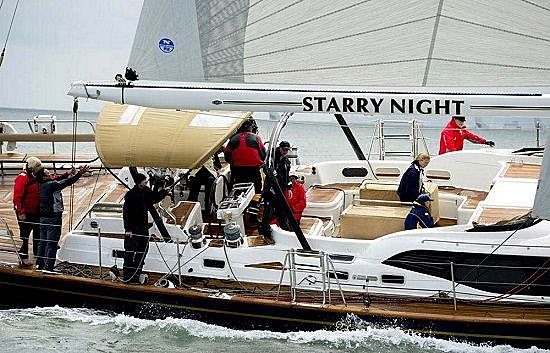 Aboard fifth-placed 56 Dreams Come True, owners Paul and Sue Fletcher were joined by fellow Dragon sailors Gavia Wilkinson-Cox and Mark Hart who, with Paul, were fresh back from the Worlds in Ireland. “Three differences between Dragons and Oysters?” Gavia proposed in a champagne toast at the race’s conclusion all tied up in Haslar, “Hot coffee thrust in your hand on arrival, hot soup downwind, and clothes in the tumble drier as soon as you’re docked!” For some there’s no going back! And with the reconstitution of the House of Lords in the air as we write, a new title was also proclaimed for valiant crew member Tim who in the repeated squalls selflessly stood sheltering his host at the helm from the onslaught of stinging rain such that he could see and steer the course. He is from this time on to be known as Protector of the Helm! 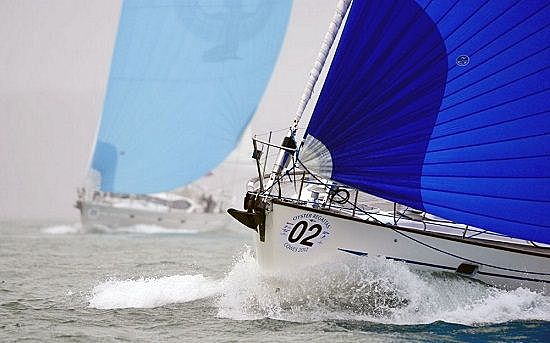 With everyone showered and tumble dried back into partying mode, and the sun finally shining for a glittering evening, the regatta crews slid out into Portsmouth harbour on a sixpenny-slicker, chartered by Oyster for the occasion, and ferried across to the splendid HMS Warrior for an evening of eclectic old naval entertainment and excellent food in what must be one of the best living museums around. And for some there were fine trophies, too, with Oyster CEO David Tydeman presenting mid-regatta prizes.

The final prize giving will be in the Royal Yacht Squadron after the final race today, but to date with two races and a tied first place in Class 2 between Nutcracker (53) and Prince de Petarcq (SJ41), and the first four boats split by only 1.75 and only six points separate nine boats, the win could be anyone’s. Class 1 is slightly more open though with three boats separated by just one point. The Manby’s 575 Isis being 0.25 ahead of the Walters’ 56 Asante, which is in turn 0.75 ahead of Starry Night.