On monday Moonen launched Sofia, the second Moonen 97. The first Moonen 97, Darsea, was launched earlier this year by the Dutch yard. Though the two Moonen 97 are “sisterships,” they are far from “identical twins,” each being highly customized by their clients. 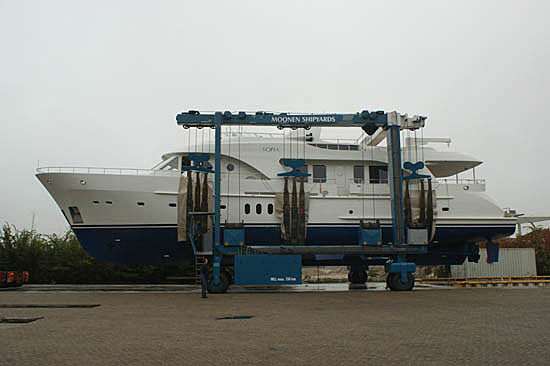 Darsea has a fixed bimini top, a single bridge-deck tender crane, a walk-through galley opening to the wheelhouse, three staterooms with double berths and one with twins. Sofia has a folding bimini top, two smaller tender cranes, an extended bridge-deck overhang, a U-shape galley, and two twin staterooms below. The saloon and dining area configurations are quite different as well.

The Moonen 97 is a prime example of how Moonen teams up with the initial client to produce a model with unique features that are universal enough to attract future clients. The Moonen 97 is an evolutionary design based on two prior Moonen yachts: the remarkable Moonen 84 (Moonen's most successful series, with eight delivered since 2001) and the custom Moonen 96 Clementine (launched 2005).