Setzer Design Group has announced the premier of "VL-56," another futuristic design from its Vision Line of projects taking shape this time for a Dubai based client.

This new design, a 56-meter superyacht named Naranja, debuts as a refined and streamlined expression of the studio's finest work. Both the hull and its superstructure have been sculpted as a blend of long lines and crisp edges, resulting in what the designer hopes will be received above all else as an elegant and proper superyacht.

The result is a vessel of five deck levels plus large below-waterline holds and systems spaces. With a beam of 10.6M and a draft of 2.7M, the design is meant for fast cruising in style and comfort, carrying plenty of fuel and water stores as well as generous cabins for owners and guests on multiple levels. 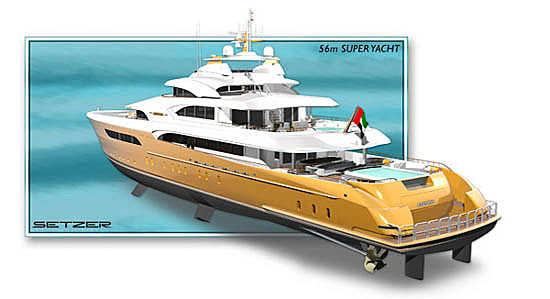 The design will be powered by a high performance diesel drive system capable of cruising speeds from 12 to 16 knots at a maximum speed of 18 knots. A large infinity pool deck has been included aft with large exterior entertaining areas just forward. A cabana has been located on the transom with dockage doors deploying aft and to starboard, adding to vessel conveniences. Duel tender garages have been integrated into the raised bow deck bulwarks with a helicopter deck above.

The unique styling of the design revolves around four large guest staterooms forward, just below the main deck, each having its own private balcony to the sea. A master suite is included on the upper two decks in a split -level fashion with the bedroom forward and a private owner's sitting room and sun deck, complete with hot tub, aft of that.

The vessel also features a gym, spa, two galley areas, multiple sunning areas, and a host of other amenities. There are five large guest cabins below decks, fully serviced by crew access. For the crew, Naranja can accommodate 15 forward in seven cabins plus one pilot's and one dedicated engineer's cabin aft in the Laz. space, as well as all typical crew lounge, galley and utility areas, including walk-in refrigerator and freezer units.

The interior style and outfitting is all about clean-lines and rich woods outlining lighter fabrics. The exterior decks include multiple private and public areas plus multiple seating areas, bars, grills, and more.

"This, project started out quite a bit larger and then has come along to take shape as a more refined thoroughbred of sorts," said yacht architect Ward Setzer, principal of Setzer Design Group. "The final result is uniquely outfitted with all the owner required and more and yet strives to stay pure in form and function."

The Setzer studio also has been continuing to diversify its offerings and deepening of its brand within Asian markets. Since receiving its fourth yacht design contract in Mainland China and its third within Taiwan -- all within the past 18 months. Setzer is currently in the planning stages of opening new offices in Hong Kong later this year. He will discuss details when he attendances the Shanghai International Boat Show this April. 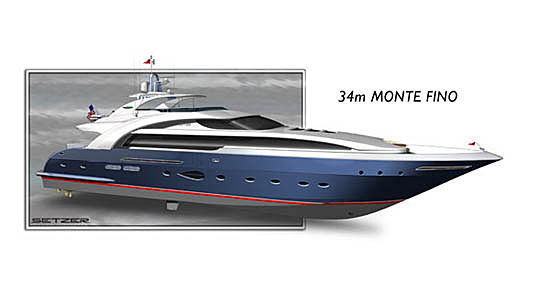 Along these lines, Setzer has continued to refine its new series for Monte-Fino in the form of their 34m project. This design has taken the studio to Taiwan to work with the Kha-Shing yard in the development of a series of refinements as well as all-new models within its Monte-Fino line. 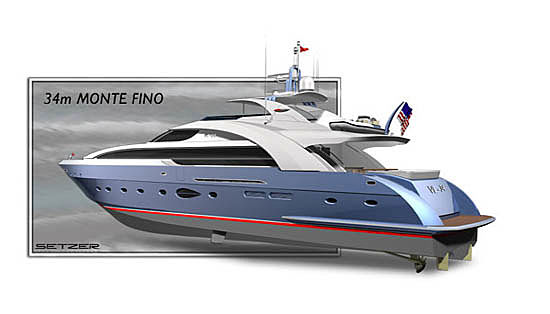 The 34m (112') design is one of the series and, again, shows the long, sleek lines of other Setzer work and includes plenty of accommodations within a 7-meter beam.

Meanwhile in China, Setzer has a new project underway at Tricon Marina: a radical, plumb bow motoryacht that will debut during this year's Fall shows.