Sevenstar Yacht Transport and their sister company, DYT Yacht Transport have announced that they will jointly sponsor the 34th annual Bisbee’s Black & Blue Marlin Tournament. The event will be held in Cabo San Lucas, Mexico from October 21st -25th. 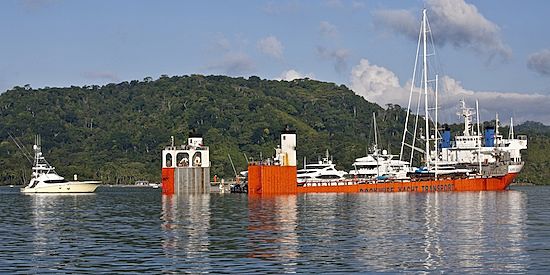 The sponsorship complements Sevenstar Yacht Transport’s lift-on/lift-off sailings to La Paz from Palm Beach via Golfito and Victoria, Canada via Ensenada that coincide with the tournament. DYT Yacht Transport also services Golfito with a float-on/float-off voyage aboard Yacht Express, loading in Le Marin, Martinique and Port Everglades, Florida in November; it then sails to Papeete, Tahiti, Brisbane, Australia and Auckland, New Zealand.

The Black & Blue tournament started in 1981 and has grown from six teams with a purse of $10,000 to more than 150 teams with millions of dollars on the line. It consists of five days of hard-core fishing for approximately 1500 like-minded competitors coming from the US, as well as over 15 countries worldwide.

“In America alone, there are 44.3 million anglers, and in our family of clients, we already have a large number of sport fishing enthusiasts who count on us to get their boats safely to their favorite fishing grounds,” said Richard Klabbers, Sevenstar’s managing director.

Klabbers added that the company’s recently announced West Coast representative, Kris Caren, will be working closely with Lauren Hartman from the Sevenstar USA Agencies in Palm Beach Gardens, Florida to provide quick rate quotes and oversee the loading and discharging operations. “We want those who have not used us before to understand what their options are for reaching the Los Cabos region of the Baja Peninsula and, for that matter, other prime fishing destinations.”