British design studio Shuttleworth Design’s current projects include two new trimaran superyacht concept designs in 32 metres and 70 metres versions. The company states that all of their latest trimaran designs are heavily based upon that of the 42.5 metre superyacht Adastra which was launched in China in 2012 and has gone on to be the recipient of a multitude of awards in the industry. 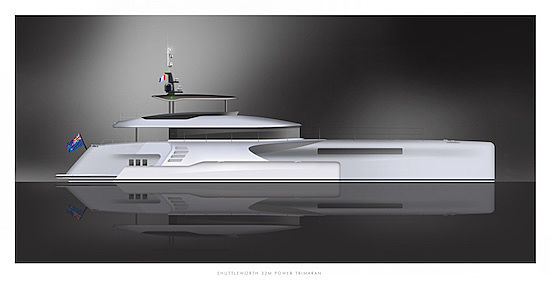 The latest 32 metre concept has been designed with long distance voyages in mind, boasting a range of over 6,000 nm at a speed of 12 knots and a top speed of 23 knots. She has been noted for her particularly impressive fuel efficiency. In addition, her interior spaces have been maximised to provide both spacious and comfortable accommodation located on the lower deck for up to four guests and a two crew whilst offering excellent seakeeping, stability and efficiency. Her interior spaces have been conceived as open plan, but can also be compartmentalised when required.

In regards to her outside spaces, she provides plenty of space and amenities for guests to fully enjoy the superyacht experience. Her flybridge presents a large shaded seating area surrounded by low coamings that ensure exceptional views when on board. In addition, a BBQ and the helm station are found in this area. Elsewhere, the aft deck also features a BBQ area, as well as a lazarette and storage space for various water toys. Though the 4.9 metre and 3.1 metres tenders are also stored on the aft deck, once launched this area further opens up to provide an ideal space for sunbathing and relaxing.

The 70 metre trimaran design further accentuates the company’s dedication to fuel efficiency as well as a real ocean going yacht, with a range of 7,000 nm at a speed of 14 knots. She boasts a top speed of 25 knots that can be increased to 30 knots with alternative engine options.

She accommodates up to 12 guests on board as well as 14 crew, including a luxurious dedicated owner’s deck containing an office lounge and opulent suite, as well as a foredeck sunbed and lounging area. On the main deck four guest cabins are found, as well as a VIP cabin located in the bow. Further guest accommodation is based in the wings of the vessel, allowing for expansive living areas on the main deck. In order to maximise guest privacy, a central column houses separate guest and crew staircases, a lift and technical area.

Outside, an external walkway around the bridge deck gives the crew clear visibility for docking and maneuvering. A forward facing sofa behind the helm station provides a relaxing space for guests to observe operation of the vessel, and the aft deck has a large sun pad with optional spa pool, an ample seating area and a bar. The aft garage houses a demountable 16ft Hobie cat, a 7.5 metre tender and a dive store with a fold beach and dive platform. Other tenders and water toys include a 4.9 metres (SOLAS) RIBS and two Yamaha jet skis.