Blue skies, black clouds, sunshine and rain all in one afternoon for the first day of racing at The Superyacht Cup Antigua. The forecast turned out to be pretty acurate, predicting 17 – 20 knots with occasional squalls, but no one really expected squalls on every leg, and winds to reach over 35 knots on several occasions during the two and a half hour race. The Bruce King designed 35m ketch, Signe who started first, cleverly maintained their position to lead the fleet round the course and convincingly take the Ship Equip race 1. 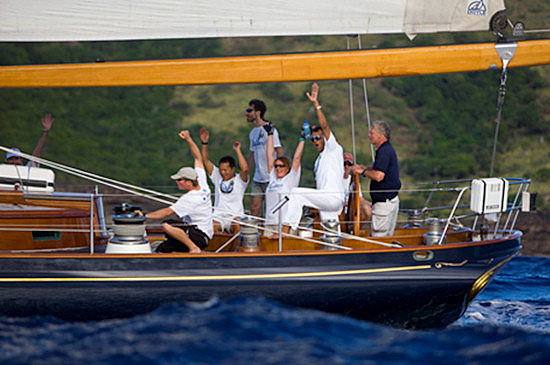 Helmed by Captain Alistair Marshall, Signe showed clear signs of taking the racing very seriously; “It seemed a great shame to interrupt everyone with multiple tacks - we were enjoying our sandwiches on the last windward leg, so heading out to sea on one long tack was the logical move. A lucky wind shift on our final tack back to the finish helped us to stay ahead and finish just over 3 minutes infront of Timoneer.”

Several Superyacht Cup sponsors were kindly invited to join the crew of Signe, with Mark Preston and Andrew Porter from Hinckley Yacht Services trimming mainsheet and headsails respectively. Also onboard, representatives from sponsors Atollvic Shipyard from Vigo, thoroughly enjoyed their first Superyacht Cup race in Antigua despite the rather damp conditions during the rain squalls.

Timoneer who managed to claw back two places on her way around, had the usual team of experts, pulled together by crew boss Greg Yeo. With Barry Jones at the helm and world-class tactician Tomac of North Sails US, their experience showed by close to perfect lay lines despite the very variable wind. Veteran Superyacht Cup Captain, Phil Wade kept a close watch on all the team including Timoneer’s owners and their guests, a remarkable group of keen sailors with the most senior member being an astonishing 94 years old.

The Timoneer crew certainly worked hard on their way around, with several hoists of the mizzen staysail, only to be hit by the squalls and forced to drop again rapidly. Not put off by the first couple of squalls, they hoisted again just 10 minutes from the bottom mark, just in time for yet another blast of 35 knots and heavy rain. The guests, comfortably shielded from the rain in the spacious pilot-house could observe the energetic deck crew desperately fighting to retrieve the vast sail from being damaged during the drop.

After racing, guests, crew and sponsors gathered at the Copper & Lumber Hotel for a rum punch or two to discuss the days’ race and no doubt plans for the next days racing. Subject to weather, two short races are planned for day 2 of the Superyacht Cup tomorrow.