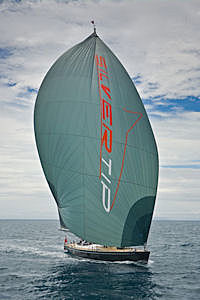 With the five Millennium Cup entrants racing around a Gulf Island course, each superyacht was started at a specific time according to their IRC rating off Takapuna beach to sail a pursuit race that saw the yachts sail around Tiri Tiri Matangi Island and Rakino Island, then back to Takapuna.

Although the breeze was very light until just before the 11:30am start, it quickly built as soon as the first starter, SY Naos, crossed the line, says Millennium Cup organising committee member Owen Rutter who was part of the crew on SY Silvertip.

"The crew on Naos did a fantastic job to hold their lead over the faster boats until nearly the end of the reaching leg to Rakino," says Rutter. "They led for nearly half the race, but unfortunately blew their spinnaker just before rounding Rakino."

On Silvertip, Rutter says they passed second starter SY Thalia just going into the Tiri Passage at the end of the first leg. "The yachts had to tack through the Tiri Passage which was quite tricky as yachts of 100ft (33m) in length don't tack too easily. Throughout the race we had around 15 to 16 knots of breeze with a maximum of 20 knots, which was fantastic."

SY Janice of Wyoming made up a lot of time on Silvertip during the reach to Rakino and our division two entrant, SY Ragtime, also looked to be having a very competitive race a little behind the division one yachts.

Several competitors commented to me that they really enjoyed today's race course as we sailed around islands, not just buoys, which added a unique Auckland Harbour dimension to the whole race.

Mark Wightman, chairman of NZ Marine which developed and organises the Millennium Cup superyacht regatta, was on the water on a spectator boat as the yachts crossed the finish line within approximately ten minutes of each other.

"It was a magnificent sight watching these luxury craft under full sail," said Wightman. "There were a number of spectators gathered to watch our race finish and every Millennium Cup competitor got a great welcome home."

Silvertip was followed home by Janice of Wyoming, Thalia, Naos and Ragtime. Points are awarded on a reverse basis, so Silvertip has one point, Janice of Wyoming two points, etc. The yacht with the least number of points after the event's four races will win the New Zealand Millennium Cup for 2009.