A small, but spirited fleet sailed four races in three days on three very different courses in Auckland Harbour. Using an IRC handicap system, Silvertip started near or at the rear of the fleet with the smaller yachts starting nearly half an hour in front of her in all four races. 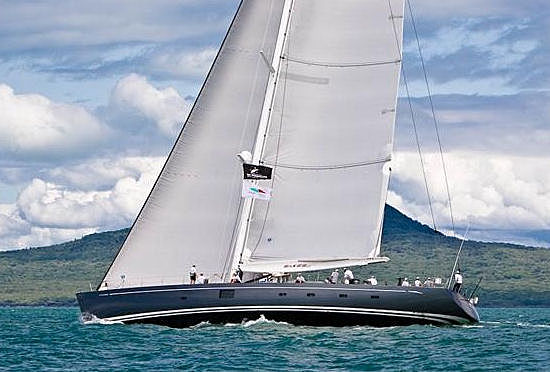 The final two races were sailed around a 12-nautical mile triangular course off Auckland's East Coast Bays. In Fitzroy Yachts race three, Silvertip, an Ed Dubois-designed 33.8 metre sloop, proved well suited to the light conditions - 7-8 knots - to easily pass SY Janice of Wyoming, then SY Thalia and SY Naos on a shortened course to be saluted by the committee boat's gun on the finish line.

The sole division two entry SY Ragtime was again the quickest craft to complete the short course. Built in New Zealand in 1964, the 19.8 metre Ragtime (formerly Infidel) has shown her considerable pace in a range of conditions throughout the regatta.

The afternoon's Southern Spars race four required two circuits of the triangular course and in 14-15 knots of breeze, the smallest yacht in the fleet, the 32-metre cutter rigged SY Naos started first and finished first much to the delight of all onboard. Janice of Wyoming crossed the line in second place to consolidate second place overall in the regatta while Silvertip finished third with Thalia fourth and Ragtime fifth.

Millennium Cup organising committee member Owen Rutter has been part of the crew onboard Silvertip for all four races. "The lighter conditions really favoured Silvertip in the morning race, but as the breeze picked up Janice of Wyoming had the advantage over us. Our racing was very close; at times just metres apart," says Rutter.

"All the competitors have thoroughly enjoyed the racing and, as we've seen with the IRC handicap system ably managed for us by Hal Wagstaff of the Royal New Zealand Yacht Squadron, different conditions suit different boats and therefore it's great to see Naos and Janice of Wyoming sail so well in this final race of the regatta." Points were awarded on a reverse basis, with one point for a win, two points for second and so on. Silvertip finished on six points, Janice of Wyoming on eight, Naos on 12 and Thalia on 14, making Silvertip the Millennium Cup winner for 2009.

Mark Wightman, chairman of NZ Marine which developed and organises the Millennium Cup superyacht regatta, sums up the event as "...fantastic! We've had excellent, competitive sailing, a very spirited golf game at Gulf Harbour and some fantastic functions each evening."

"This encompasses everything a Millennium Cup regatta should be - an extremely enjoyable way to celebrate the New Zealand marine industry and our involvement in the international yachting fraternity. We thank all our competitors, all our guests to celebrated the regatta with us at our events and all our sponsors for helping us make the 2009 Millennium Cup Pacific Series a truly great regatta," says Wightman.

"This Millennium Cup Pacific Series has offered superyacht owners the last chance in what could be a long time to compete for the Millennium Cup in Auckland. Our event is intrinsically linked to the America's Cup and Louis Vuitton Cup, so all you can say with certainty is that the next Millennium Cup will be sailed overseas and we look forward to welcoming everyone to our next event whenever it may be."