Powerful, easy to use and environmentally sound at the same time – these are the features that so far no propulsion system for super yachts has been able to combine into one package. Now for the first time the SkySails company from Hamburg (Germany) can deliver precisely this kind of propulsion: the SkySails-System. 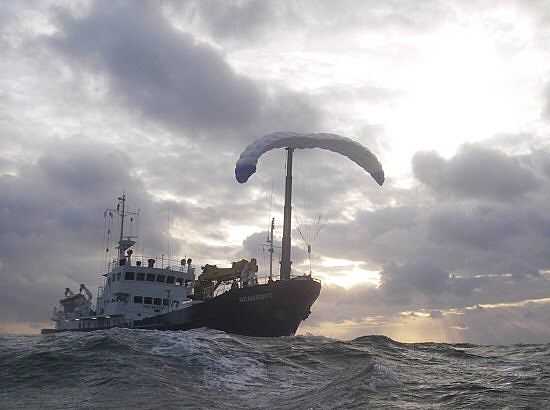 The SkySails-System generates two to three times the thrust compared to sail-based propulsion systems secured to masts. This means you can reach higher speeds, save fuel and extend your super yacht’s range. Yachts fitted with SkySails perform as comfortably at sea as sailing yachts, but without the troublesome heeling. This way even motor yacht owners can “sail“ noiselessly and without producing any harmful emissions.

The SkySails technology consists of three simple main components: a towing kite with rope, a launch and recovery system and an automatic control. SkySails is easily operated from the bridge and is controlled by an autopilot similar to those used in aircraft. 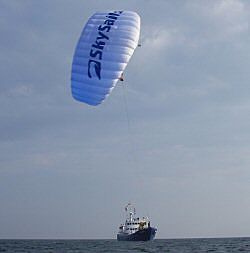 Over the last two years the SkySails-System has been fully developed and made ready for the market on the “Beaufort“, SkySails’ 55 meter and almost 800-ton testing ship. The test results show that because of the high performance of the SkySails propulsion, fuel savings of up to 1200 liters per day can be made on ships of this size by using only an 80-square-meter towing kite. “Correspondingly, and based on the latest testing results, towing kites with double the surface area can save up to 2400 liters of fuel a day,” reports SkySails managing director Stephan Wrage.

“The test results also demonstrate how the SkySails technology is all set for use on super yachts,“ says the renowned yacht designer Rob Humphreys. “In these times of climate change and growing shortages of raw materials, SkySails kite propulsion unveils a new and fresh way of powering yachts. Another key advantage is that this SkySails technology enables entirely new and superior yacht designs to be made.“ 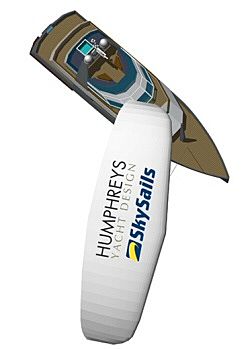 Humphreys Yacht Design, together with SkySails, exhibited the concept for a high-performance hybrid super yacht at this year’s Monaco Yacht Show. Powered by SkySails, this 40-meter trimaran can reach speeds of up to 18 knots without the help of its main engine, and up to 30 knots with the main engine.

Naturally the two power sources can be used in combination to conserve fuel. With SkySails a shaft-driven generator can be activated, which charges batteries that can supply the main diesel-electric propulsion as needed. This way, with suitable wind conditions, the hybrid yacht can be powered without having to depend on oil.

Yacht owners can now sail in a way that is ecologically responsible, without having to sacrifice the comfort they’ve come to enjoy. And, this type of propulsion provides owners a high degree of security and independence in times of crisis.