The Slojo YAG Challenge: 2010 Transpacific Triathlon (www.slojoyagchallenge.org), a fundraiser aboard Motoryacht Slojo that sought to raise money and awareness for YachtAid Global—a charitable organization that orchestrates Superyacht deliveries of humanitarian, conservation and developmental aid to isolated communities worldwide—came to a close as Slojo reached her destination. 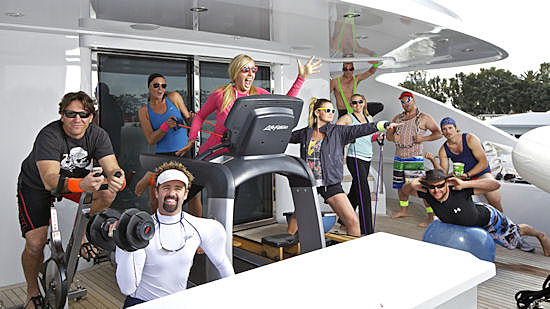 During the estimated 3,200-nautical mile passage, Slojo’s owners, guests and crew—aka the athletes—made a commitment to run, bike and row on machines 24 hours a day for approximately 12 days as they crossed from San Diego to the South Pacific. In return, the athletes sought pledges from people who could donate as little as a penny per nautical mile. In honor of Slojo’s arrival to Nuku Hiva in the French Polynesia, YachtAid Global is pleased to announce the results of the fundraiser. The Slojo YAG Challenge raised over $53,100 usd, to fund YAG’s projects and causes.

“To all the donors and athletes, thank you! Every donor and all the athletes played an important part in the success of the Slojo YAG Challenge. The level of interest from around the world has proven to us that the charitable side of the yachting industry has a bright future,” said Mark Drewelow, founder and program advisor of YachtAid Global. “From the Slojo YAG Challenge experience, I’m confident that YAG can work with any yacht to customize a fundraising mechanism in which the proceeds are utilized for projects that interest the yacht while benefitting the many isolated communities worldwide that need the help.”

On December 11, 2010 the 47.5 meter Delta motoryacht departed San Diego holding 15 athletes prepared to take on the relay challenge. To keep the momentum going and supporters engaged, the athletes did something new and creative to countdown each day of the challenge. Day Seven marked the halfway point of the challenge and the athletes were charged with dressing up in outfits that reflected their accomplished milestone. All athletes participated with an athlete showing up wearing a half-and-half creamer carton while another showed up dressed half Indian and half cowboy. On Day Nine, they crossed The Equator and performed ceremonial acts on those who had never crossed the equator before, a tradition that dates back centuries. The athletes maintained a Slojo YAG Challenge Facebook profile and uploaded new photos each day, posted status updates and shared insights with supporters as they made their passage.

Upon completion of the challenge and unveiling of the amount of funds raised, the owners, guests and crew reflect on what the YAG Challenge meant for them.

“We’re all deeply touched with the amount of support we received,” said Jim and sujo, owners of Slojo. “We got as far as we did because of all the donors and supporters who rallied us. We’re truly thankful and look forward to working with all the YAG projects that these funds will help fulfill.”

“As guests aboard, it has been amazing and fun to witness the crew’s support and encouragement of each other,” said the owner’s guests Rob and Debbie. “It created a new dynamic on the boat and strengthened an already strong camaraderie. I’m so thankful that we as guests were asked to participate.”

“Initially, I can say the crew and I were a bit nervous to see where the YAG Challenge was going to take us. However, with the shared goal of wanting to give back to the communities that welcomed us in the past and that will open their homes to us in the future, we could probably go another passage,” said Captain Bruno Herregods with a smile.

With YachtAid Global’s ability to customize sponsorships, the Slojo athletes had the opportunity to choose a region to benefit from its physical efforts. As a team, they chose to benefit the Pacific region, an area they heavily cruise. Proceeds from the Slojo YAG Challenge will provide children in the Pacific with the tools they need to learn and empower them with knowledge on what they can do to conserve the environment, protect the surrounding wildlife and improve the condition of their well-being.

Donations can still be made to YachtAid Global and more information about YAG projects and causes can be found by visiting www.iyag.net.