As most yachts cruise in sunny places, harnessing energy from the sun would seem to make perfect sense. The promise of a clean and renewable power source for silent and fume-free cruising is irresistible, so why don’t we see more solar-powered superyachts? 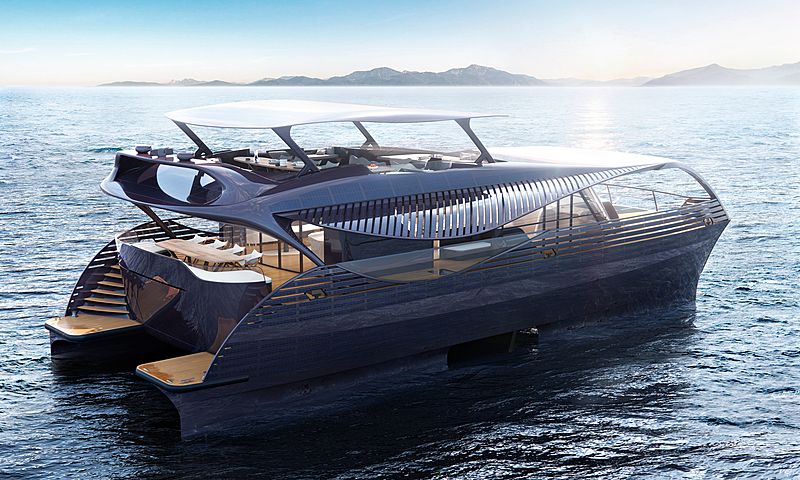 Photo: Solar ImpactBefore 31-metre Tûranor PlanetSolar became the first solar-powered vessel to circumnavigate the globe in 2012, I asked her designers what relevance they thought the project had for the superyacht world.

“To be honest, not much at the moment,” responded Craig Loomes of LOMOcean Design in New Zealand. “But that’s a reflection of how power-hungry modern yachts are, rather than a comment on the technology itself, which is constantly improving. PlanetSolar was designed to demonstrate the potential of renewable energies and photovoltaics, so in that sense, it’s an ongoing experiment.”

Today, e-mobility is a hot topic and the renewables field has developed dramatically. Solar power, in particular, has evolved from a niche market into the fastest growing source of new energy worldwide. Photovoltaic and battery technologies are more efficient and less expensive than ever before. The lithium-ion revolution has largely been driven by the automotive sector and there are now well over a million electric cars in Europe. Auto manufacturers are phasing out diesel models and cities from Milan to Madrid are banning older vehicles from their centres. 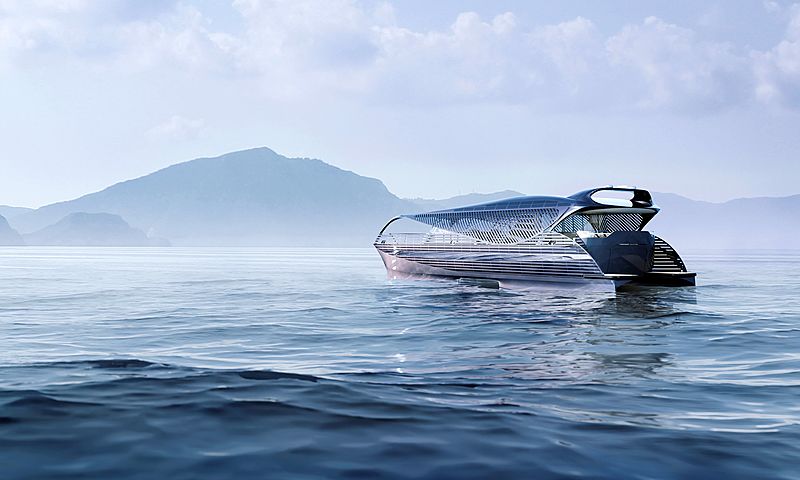 Photo: Solar ImpactMaritime e-mobility has developed more slowly. This is especially true of superyachts, which are still wedded to fossil fuels. The reason is simple: the energy required to push even a pocket-sized displacement superyacht through the water at anything like hull speed is beyond the capacity of any propulsion system that relies solely on electricity from renewable sources.

“Solar energy for propulsion is never going to work on a big displacement monohull,” says Michael Köhler, the Austrian founder of the Silent Yachts brand of solar-powered catamarans. “What you need is a lightweight multihull that provides low drag and a much bigger surface area for the solar panels.” 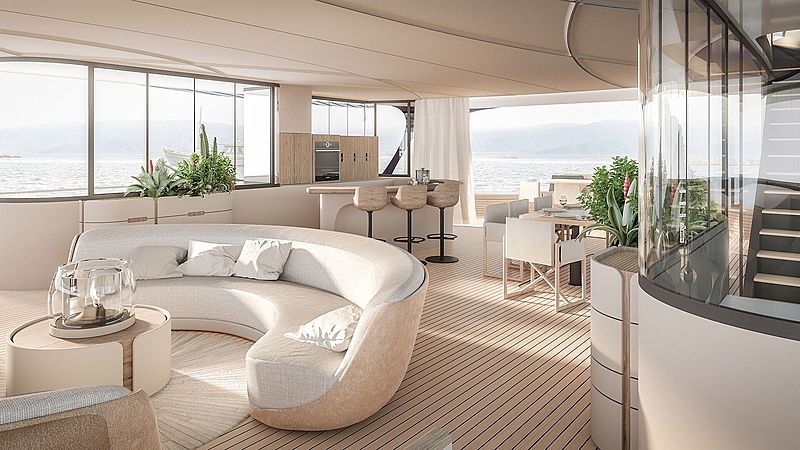 Photo: Solar ImpactKöhler’s lightbulb moment came when he was cruising on a sailing catamaran in the Caribbean. Because of variations in wind speed and direction, he realised that the number of sunny days for solar-powered cruising far outweighed those suitable for sailing.

Five years of research into alternative power systems on yachts resulted in a 46-foot prototype. A 64-foot catamaran followed, which became the first solar-powered production yacht to cross the Atlantic, and the Silent 55 debuted last year at the Cannes Yachting Festival.

Silent Yachts is now creeping into superyacht territory with its latest and largest solar-powered electric catamaran to date: the Silent 80. Designed inside and out by Marco Casali with naval architecture by Insenaval, two units have been sold and the lightweight, resin-infused composite hulls are in build at a shipyard in Marotta near Ancona, Italy, with the first delivery expected in 2020. 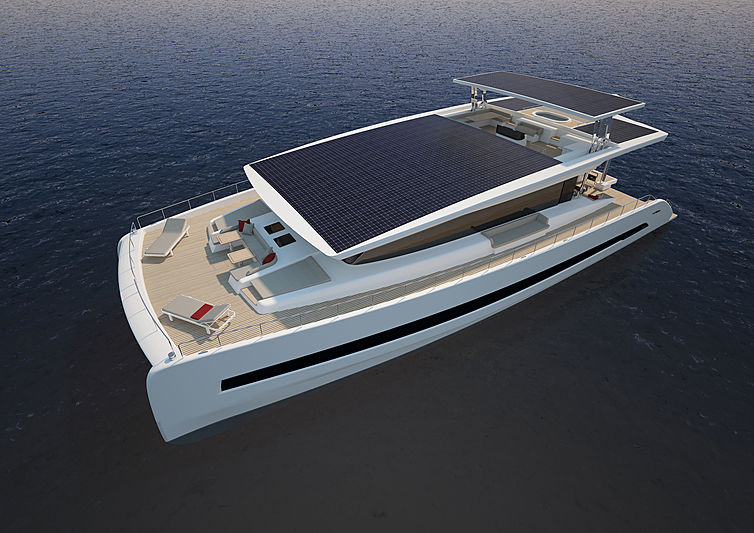 Photo: Silent YachtsDisplacing around 48 tons, the 24-metre catamaran has 114 square metres of high-efficiency solar panels. These feed a lithium-ion battery bank with a total capacity of 240kWh using a smart power management system to optimise the conversion of the DC output from the solar panels down to the lower voltage needed to charge the batteries and monitor the cell voltages and temperatures of each battery module.

Fitted with twin 250kW e-motors, the yacht has a top speed of 14-16 knots and can cruise at 8-10 knots indefinitely and silently with zero emissions on solar electric power alone. A Volvo 100kW generator is used as a “range extender” for recharging the batteries for faster speeds over long distances or during long periods of foul weather.

Marcello Maggi, co-founder of the ISA shipyard in Ancona and now an independent consultant based in Monaco, has partnered with Michael Köhler to establish the production site in Italy and a dealership network for the brand.

“I was fascinated by the project from the beginning,” he says. “As someone already investing in renewable energy, I firmly believe that the future of yachting is electric. The market is ready for this kind of product and I think demand is destined to grow. I’ve also noticed that young families who charter a catamaran, especially those new to yachting, seldom go back to a monohull.” 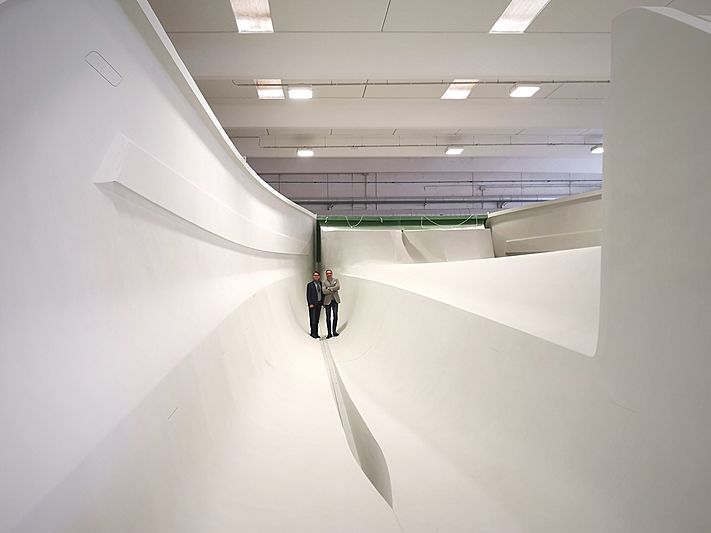 Photo: Silent YachtsIt is no coincidence that the majority of Köhler’s clients are relatively young, self-made millionaires with little or no previous experience of yachting – a client profile more suited to the conservation-minded approach required for a solar electric system to function as intended. Little thought is given to saving energy on a conventional yacht with two or more generators that can work in series to handle peak hotel loads. On a solar-powered yacht, care has to be taken to use high-energy consumers like boilers, water makers and air conditioning more intelligently, or at least not waste electricity.

“Our owners tend to be early adopters of emerging technologies and are concerned about the environmental issues facing the planet,” says Köhler. “A typical client has at least one Tesla – and one of our owners has four! It requires a different mindset and as the boat gets bigger with more guests and crew on board, that becomes more difficult to manage.”

A potential obstacle to the proliferation of solar power on yachts is the catamaran configuration itself. Catamarans tend to be an acquired taste and their boxy shape doesn’t appeal to everyone, especially among European owners. Despite the need to provide as much flat surface area as possible to carry the solar panels, Marco Casali has succeeded in injecting a dose of Italian elegance into the balanced design of the Silent 80, while the standard layout provides for four large ensuite cabins in the hulls, including a master suite with study, walk-in around closet and even an optional sauna. 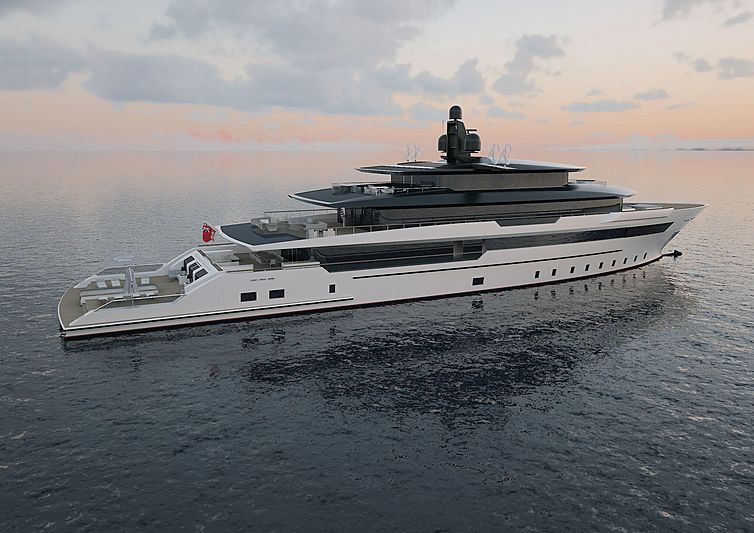 Photo: Marco Casali“A catamaran will never be beautiful for some purists, but the practical advantages outweigh the aesthetics,” says the Rome-based designer. “With a beam of nearly 11 metres, the main deck is massive, and because there’s no traditional engine room there’s space for a 4.5-metre tender in the garage. To find anything comparable on a monohull, you’re looking at 35 metres or more.”

With 15 catamarans sold to date, Silent Yachts has stolen a lead on the competition, but it is not the only player in the emerging market for solar-powered yachts. Solar Impact Yacht, a Swiss-based company, received wide media attention last year when it revealed a 24-metre solar-powered concept with radical exterior styling by young Polish designer Marlena Ratajska based on SWATH (Small Waterplane Area Twin Hull) technology.

Solar Impact was set up by Werner Vögeli, a seasoned catamaran sailor who felt that conventional propulsion was outdated. Working with top suppliers and boat builder Schaaf Yachtbau in Germany, 300 square metres of solar panels produce up to 33 kW of electricity per hour that can be stored in an 800kW capacity battery bank to power two 500kW e-motors. The company claims the solar yacht is capable of unlimited cruising at five to six knots in eco mode and speeds of over 20 knots for short periods. 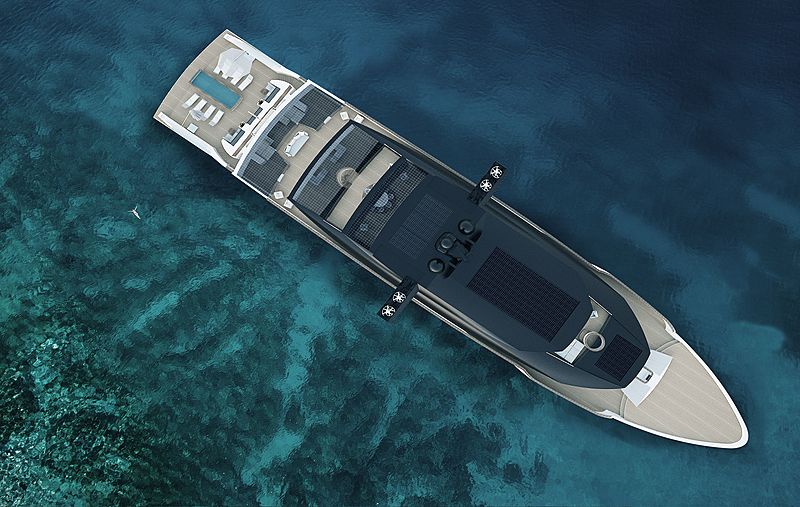 Photo: Marco Casali“Construction on the aluminium hull has started in Gdansk,” says Jörg Schaaf, CEO of Schaaf Yachtbau GmbH. “Once completed, it will be transferred from Poland to our shipyard in Germany for finishing and we hope to launch by the end of the year. The technology can be scaled up in size and we’ve received enquiries for projects up to 35 metres in length, but as the boat gets bigger the power required for propulsion also increases.”

Beyond a certain size and displacement, it makes more sense to opt for a hybrid system that uses renewable energy for the hotel loads and diesel engines for propulsion. Marco Casali, who has set up a start-up company to transfer the latest developments in solar and wind technology into yacht design, has developed a 72-metre monohull that draws on both solar and wind power sources for its household energy needs.

The Iperione concept features 138 square metres of solar panels (32kW/h), helical wind turbines (4 x 1kW/h), and over 100 square metres of photovoltaic glass (20kW/h). The designer is even looking at floating solar cells that can be deployed when the yacht is at anchor. Cooled by the water, these floating solar cells are more efficient because they work at lower temperatures.

“What’s clear is that renewables aren’t going to replace fossil fuels for propulsion on displacement yachts,” says Casali. “But when you consider that generators on superyachts are running 24/7 and may burn more diesel than the main engines, they can certainly make a difference.”

Four Silent 80 yachts sold and due for 2020 delivery