Organised by TMX Show Productions and supported by the Singapore Tourism Board, Boat Asia 2012, which ran from 12-15th April at Marina at Keppel Bay, featured a line-up of more than 50 luxury yachts from 30’ to 130’ and showcased the best of South East Asia’s growing leisure marine industry. Over 12,000 visitors thronged Boat Asia where more than 100 exhibits from the Asia-Pacific, Europe, US, Middle East and China were on display throughout the four days of the show. 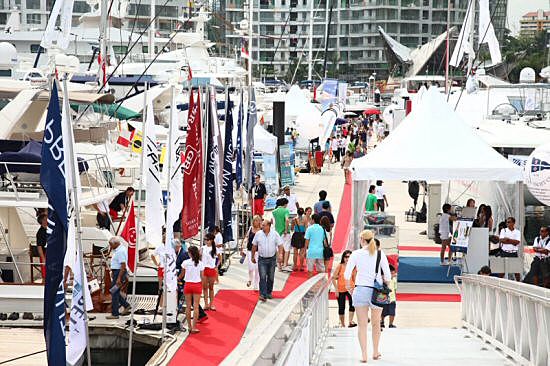 Although boating markets have been relatively quiet, the event’s long-held reputation for attracting genuine yet disparate buyers to see a wide range of watercraft, from sailboats to superyachts, again proved the right Asian formula, and separately, CEO Herman Ho said substantial new initiatives would help increase both exhibitors and high-end visitors when the next Boat Asia takes place from 18 th to 21 st April at Marina at Keppel Bay in 2013.

Observers noted that Hainan Rendezvous in Sanya, China International Boat Show in Shanghai and Boat Asia in Singapore would now be held in consecutive weeks, allowing yards in Europe and America, the Middle East, Australia and New Zealand, to better focus on the evolving Asian scene.

Mr Ho did not elaborate on what the Boat Asia initiatives may be, but he has taken a nononsense approach to the event since purchasing it five years ago, and moving it steadily upmarket. A company spokesperson said more announcements can be expected soon.

Added Mr Ho: “It’s been immensely satisfying to see serious sales and charter business being transacted at Boat Asia. We continue to cement our position as the only leading Singapore-based regional boat show of real merit, one which always delivers”.

In-water superyachts included Horizons, Sunseekers and Westports, while other intended big boats were unable to make it from Hainan Rendezvous in time, not a problem next year. Leading mid-range brands that did well included Clipper and Princess, both with the burgeoning Prometheus local agency, plus Beneteau, Chaparral, Chris Craft, Donzi, Four Winns, Grady White, Hanse, Lagoon, Leopard, Prestige, Sealine and Sunreef Yachts.