Richard Earp of the Fraser Yachts Monaco office just listed the 55.17 metre Southern Cross III. Built by the Japanse shipyard Sterling Yachts in 1986, Southern Cross III is one of the most well known superyachts of her time with her typical Jon Bannenberg styling. 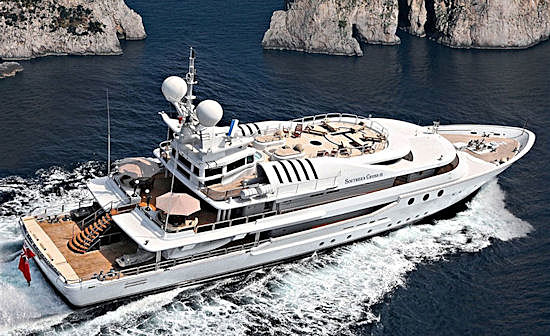 The superyacht’s sun deck was totally renewed in 2005 with a new mast, new Jacuzzi, new shower area and a fully equipped gymnasium. In 2008 a new seating area with two small tables and a large sunbathing area were added on the former helipad.

Southern Cross III sleeps 15 guests in 5 double, 2 single and 1 triple cabin. With her twin 2,000hp Caterpillar 3512B diesel engines she cruises at 14 knots with a maximum speed of 18 knots.

The displacement motor yacht is asking EU 12,000,000 and available for inspections in Genoa.