Visitors to the Qatar International Boat 2013, being held at Lusail Marina, Doha, from 12th to 16th November, were thrilled with a display of flyboarding – a unique sport featuring a board that uses water jets powered by a Jet ski to propel its operator into the air as high as 10 metres. 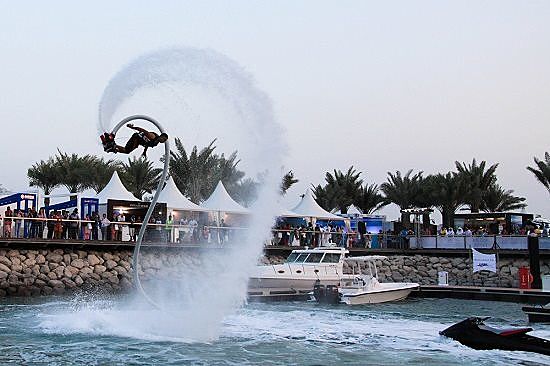 Development of the Flyboard’s propulsion mechanism began in the spring of 2011, and it was introduced to the general public during the World Championship in China that year. Its first world championship event in Doha was the following year in October 2012 at which more than 20 nations were represented. A video posted on Youtube was visited around three million times in 15 days after its release.

Rashid Al Kawari, an expert Qatari Flyboard operator, performed loops and spins in the air, together with dunks into the water as his board threw out high powered jets of white spray. “The Flyboard is very intuitive. It’s like learning to walk,” Al Kawari explained. “Between two and 20 minutes are needed to learn to use it with an instructor or 20 minutes to an hour without. The nozzles under your feet ensure 90% of the propulsion allowing movement which depends on the feet tilt of the flyboarder, while the nozzles on the hands are used to ensure stabilization in the same way you use ski poles.”

Ahmed Fathy Abdelrazek of Performance Marine, the distributor for the Flyboard in the Middle East, said the Qatar International Boat Show had been an excellent event at which to sell his machines, which are priced at QR33,500 each. “Sales have been good this week, and we are delighted with the response we have got from the buying public,” he concluded.