The 69th edition of the Rolex Sydney Hobart Yacht Race shaped up early to be one of the most exciting editions on record. The 94-boat fleet featured five 100 foot maxis, three Volvo 70s, seven former race winners and a seriously competitive lineup across the fleet. Several newly-launched boats came to the race as ‘dark horses’, having not yet competed or in relatively few races, and with veteran crew who had the experience to make them a threat; among these were Anthony Bell’s Perpetual Loyal (ex-Speedboat, Rambler 100), Karl Kwok’s Botin 80, Beau Geste; Matt Allen’s Carkeek 60, Ichi Ban, and Jim Delegat’s Volvo 70 Giacomo. 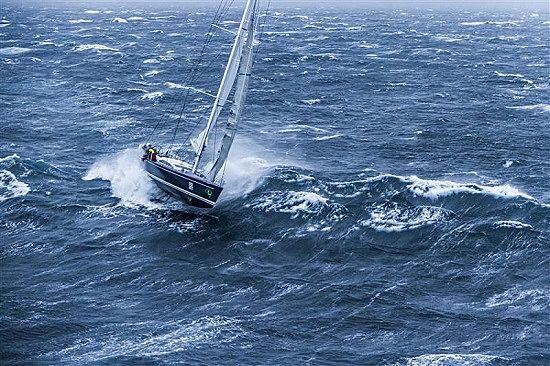 The iconic 628-nautical mile offshore race is on the bucket list of offshore sailors worldwide, and this year’s race was no exception as it included 22 international entries from Germany, the United Kingdom, New Zealand, Singapore, Hong Kong and Cyprus. The German yacht Varuna competed in the major Caribbean regattas last winter, followed by the 2,225 nautical mile Transpac Race from Los Angeles to Honolulu, after which the Ker 51 was shipped to Australia. For owner/skipper Jens Kellinghusen, the trip to the Rolex Sydney Hobart was inevitable, he said, “It’s one of the top events in the world, and it was on our dream list.” Zefiro, a Farr 100, is on a round-the-world cruise westward from its homeport in the island country of Cyprus and came to Sydney to compete in the Rolex Sydney Hobart Race. Following the race, Zefiro will continue back to the Mediterranean via Indonesia. 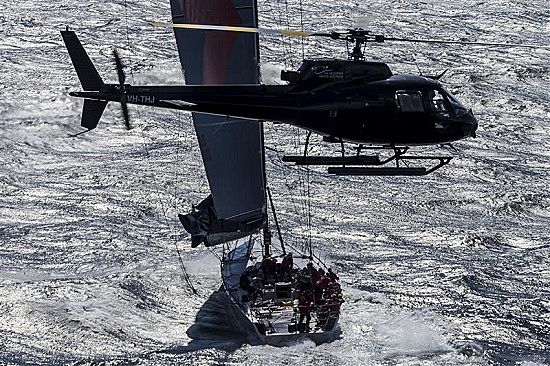 With a bit of luck, by the Boxing Day race start on 26 December, a low pressure system had moved out to sea leaving behind picture perfect conditions: a 15-18 knot southeasterly, sunshine and blue skies. The Sydney Opera House and Harbour Bridge provided a stunning backdrop to an extraordinary start venue, with hundreds of thousands of spectators watching from shore, as well as live television and streaming web coverage watched by an impressive TV and on-line audience worldwide. 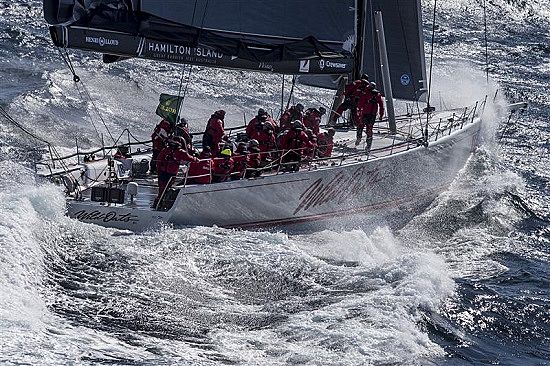 With their remarkable power and speed, the 100 foot maxis never fail to impress. This year’s race featured five of them: six-time Rolex Sydney Hobart line honours and two time overall winner Bob Oatley’s Wild Oats XI; Perpetual Loyal, the newly modified Speedboat/ Rambler 100, Ragamuffin 100 with skipper, Australian yachting icon, Syd Fischer – who celebrated his 86th birthday while competing in his 46th race – Wild Thing, and Zefiro. The size and pace of the top end of this year’s fleet – which all got off under the same starter’s cannon – required a change to three staggered start lines inside Sydney Harbour. The bigger boats set their giant code zero headsails and were off quickly: Wild Oats XI and Perpetual Loyal leading the fleet out past Sydney Heads, closely followed by Beau Geste, Ragamuffin, and Wild Thing, along with the Volvo 70s, Black Jack and Giacomo. 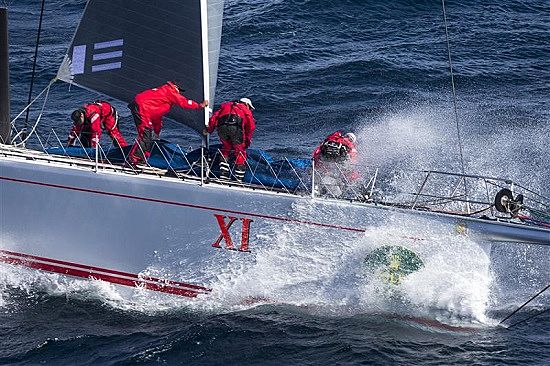 The forecast held true over the first night into 27 December, during which time Anthony Bell’s Perpetual Loyal made the strategic move to head further offshore. Loyal’s tactic worked, as they eked out a gain of close to 14 nautical miles in front of Wild Oats XI, surprising even Loyal’s navigator Stan Honey, who said, “We’re pleased to still be in the hunt, as light air is not our strong point.” By midday though, Wild Oats XI got into her performance groove and started to reel Loyal in and finally overhauled and passed her to take the lead. Ten miles back, Ragamuffin 100 was a close third and briefly led the fleet on handicap. Syd Fischer’s latest boat had a respectable pedigree, originally built as Maximus, it took the line honours win in the 2011 Rolex Sydney Hobart as Investec Loyal. The rest of the fleet eked its way down the coast slowly given the light breeze. 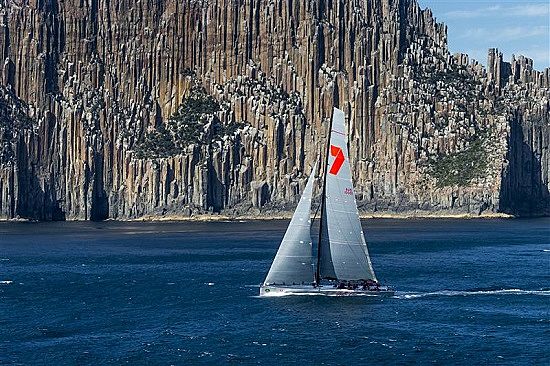 The frontrunners reached across Bass Strait, and despite the light breeze, they began to separate from the rest of the fleet. By sunrise, Wild Oats XI had stretched her lead to 26-nautical miles over Perpetual Loyal. Further back, the two Volvo 70s, Giacomo and Black Jack, were pacing each other down the course along with the 80-ft, Beau Geste. All were geared for stronger conditions and struggled to stay in touch with the leaders in the lighter winds.

Later in the day, the northeast breeze increased in advance of the westerly change that would come later that evening. Wild Oats XI reveled in the building downwind conditions, making the most of her most recent modifications, including the much talked about hydrofoil wing, nicknamed the “ironing board”, that kept the bow from nose-diving. The crew was kept busy with constant sail changes – skipper Mark Richards later reckoned they made at least fifty. Wild Oats XI 's lead grew to 50 nautical miles, and while Perpetual Loyal was able to claw back some of those, it wasn’t enough. Finally, Wild Oats XI sailed up the Derwent River, and close reached to the finish line and crossed with an elapsed time of 2 days, 6 hours, 7 minutes, 27 seconds. Richards and crew took their seventh line honours win, which tied the amazing record held by the yacht Morna, later renamed Kurrewa IV, one that has held for over 50 years. 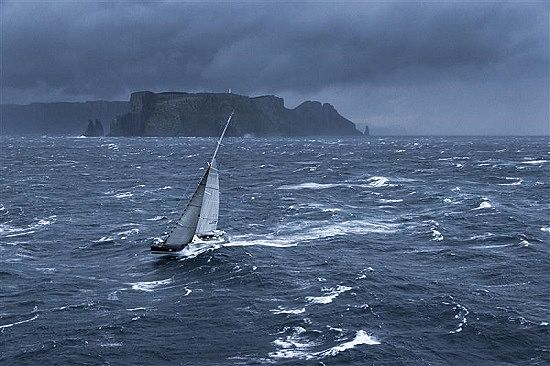 Dockside Richards was amazed at how well Wild Oats went when it got windier and windier, and commented, “We just got faster and faster compared to the other boats – it was a really cool experience.” Quick to praise the crew, he added, “It’s hard to explain how good the chemistry is on that boat…there is a lot of passion.”

The sharp change in weather conditions over night took its toll, with five yachts retiring, including the British yacht Henri Lloyd, which was east of Cape Barren Island when it lost its rudder bearing, and Wedgetail dismasted off of Tasman Island. 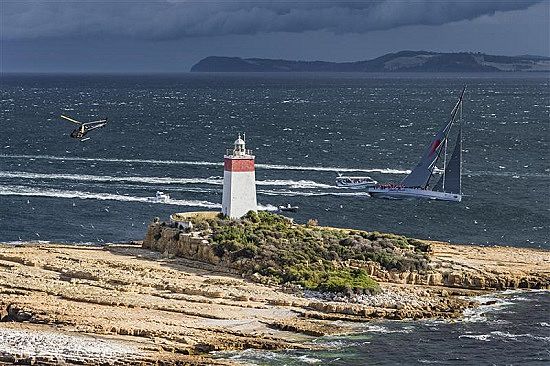 Despite a forecast that was spot on as to timing, many were surprised by the speed of the southwesterly front. Conditions off the Tasmanian east coast proved treacherous for many in the fleet – though not terribly unusual for the Rolex Sydney Hobart – most notably at Tasman Island, where the rhumbline course required the fleet to harden up and face the brunt of the building southwesterly wind and massive seas.

The yacht Kerumba found a steady 40 – 45 knots off Tasman, with a peak of 57 knots. Navigator Rob Buchanan described a sea state that was manageable: big south Atlantic swells, four to five meters high. He recalled, “We had waves break over us a couple of times, but it wasn’t inordinately rough. We were probably slightly over pressed, a number four jib and a main with two reefs; we took the view that we needed the power in the troughs to get through it.” 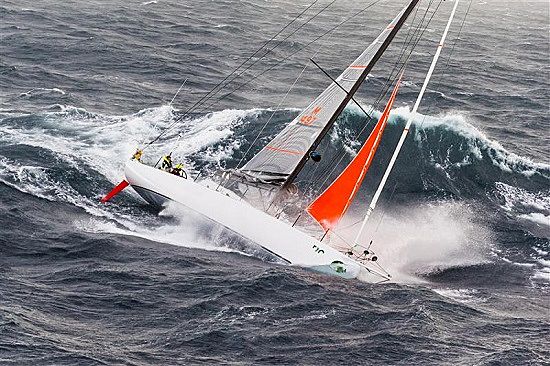 Darryl Hodgkinson's Victoire had the pedal down on their wild ride south, and when the Cookson 50 crossed the finish line at 8am AEDT, it took the overall handicap lead. The Sydney based skipper would credit tactician and strategist, Sean Kirkjian – veteran of 17 races - and said “He’s a wizard who’s just playing ‘ocean chess’ all the time.” But Victoire would had to wait overnight to see if any competitors could reach Hobart in time to unseat them.

Overnight the weather conditions moderated slightly to 20 - 25 knots. For Roger Hickman’s Wild Rose, any chance of upsetting Victoire as overall handicap leader was not to be. The 37-time race veteran later recalled, “If we could have gone in a straight line at six knots we could have gotten there. But the wind was howling…it was a really a tough, and rough, race.”

By mid-morning the Cruising Yacht Club of Australia confirmed Victoire as the official Overall Winner of the 69th edition of the Rolex Sydney Hobart Yacht Race. At a dockside presentation, Hodgkinson was presented with the Tattersall’s Cup and a Rolex timepiece. Hodgkinson bought the boat as a birthday present to himself with a two-year plan to win the Rolex Sydney Hobart – which he fast tracked, succeeding on his first try with the new boat.

The ebullient skipper recalled Victoire’s tough race, “When we got that heavy northeasterly, there were moments when we had to believe in ourselves and our yacht. We knew this boat had won before, so we let it run. We were only going to win if we pressed really hard…we couldn’t let our foot off the pedal. There were some moments when the foot was right down and it was like ‘oh, this is a ride’. We were thrilled!” 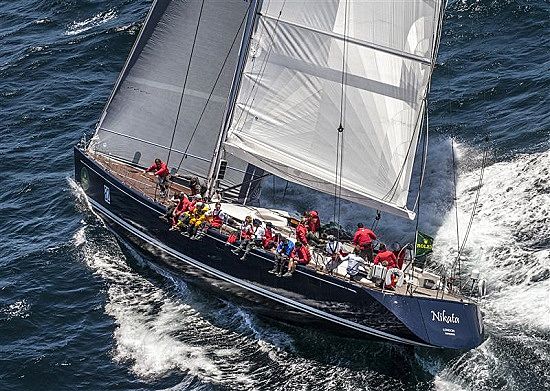 On 31 December, the final yachts trickled in with last yacht Namadgi, arriving just before 11pm AEDT. As they motored to their berth, they were cheered by tens of thousands of New Year’s Eve revelers lining the shore – just in time for Hobart’s brilliant fireworks display. From a total of 94 race starters, 84 yachts finished the race, and despite some of the most challenging conditions in recent years, only ten yachts retired, a testament to the depth of experience and skill of the 2013 Rolex Sydney Hobart Yacht Race fleet. 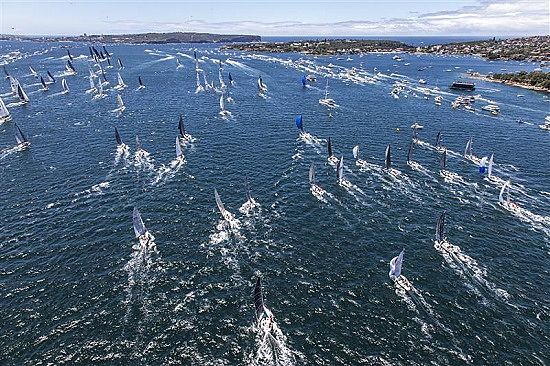 Interest is building in advance of the 2014 Rolex Sydney Hobart Race, which will be the 70th edition. Already maxis Wild Oats XI and Perpetual Loyal are among the competitors that have confirmed they intend to be on the start line, which will be sure to attract the most competitive sailors and yachts from all corners of the world.