This is not your ordinary refit. Rather than selling their yacht and buying a bigger one to suit their needs, the owners chose to re-built their existing yacht they loved and add and incorporate all the new amenities they desired. 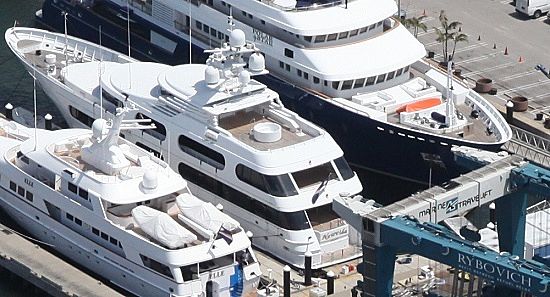 In April 2013 Rybovich was contracted to transform the 160 ft (48.80 mtr) Motoryacht Newvida, originally build by Delta Shipyards as Gallant Lady, into the 185ft(56.40 mtr) MySeanna by performing an extensive re-built. The hull and decks were extended at the aft end of the yacht by 25ft (7.60 mtr), to allow the creation of a great beach club inside the hull, with a large opening transom door and new swim platform to become the new center of watersports entertainment which the yacht did not have before.

Also the outdoor spaces on the main deck and bridge deck have been greatly enlarged and improved and offer a 180 degree vistas. In the original situation the aft decks were fully enclosed by tinted glass panels wrapping around the back of the boat (see photo). In the new version the aft decks have been completely opened up, and on the main deck a step has been created in the deck to raise the central seating area to even further enhance the view of the surrounding areas.

On the (extended) sundeck a fantastic lounging and social area has been created, which when not in use is transformed into a helicopter touch ‘n go pad. A new oversized hot tub, with sun pads behind and bar in front will certainly be the place for some great parties, or just for hanging out to relax. On the portside there is a new sauna and a separate bathroom so you will never have to leave this deck if you don’t want to. Forward is also the gym equipment where working out in the morning should be the best way to start the day.

If you want to be more private, on top of the sundeck structure a new sunbed area has been created with windbreak glass all around and views of 270 degrees make you feel like you are on top of the world. 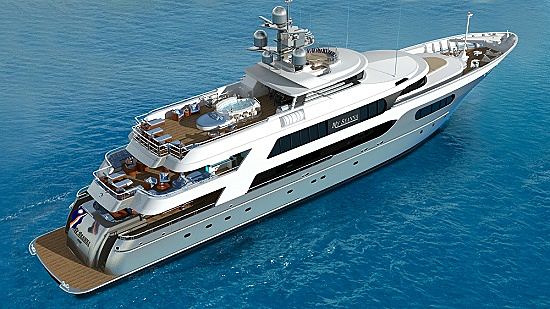 Inside has not been forgotten and some major improvements have been incorporated in the interior spaces. The top deck interior has been transformed into a spectacular 360-degree view VIP stateroom. The new interior and opened up staircase has been made to match the rest of the vessels décor. On the bridge deck, the staircase that used to be there is no longer there, greatly improving the entertaining opportunities and seamlessly connecting the indoor and outdoor spaces on this deck through new fully hiding double sliding doors. The guest staterooms all get new much-enlarged porthole windows also giving more visual connection to the outside world on the lower deck.

The exterior of the yacht has been given a major work over, changing the fashion plates, railings, bulwarks, window shapes and accent lines and to top it all off the hull will be painted in beautiful metallic silver. This is a full makeover and certainly justifies the name change as this is really an entirely new yacht for the owners to enjoy and fall in love with all over again. My Seanna will be cruising the Mediterranean waters this summer. She will be an excellent yacht for those who would like to entertain or just escape from the busy everyday life.