The vessels Estrella Damm and W Hotels have put their strength to the test in an in-shore regatta that took place along the New York Bay, close to the Statue of Liberty, to serve as a prelude to the New York-Barcelona Transoceanic Sailing Record, a new oceanic challenge that will set the first record between the New York and Barcelona.

In a race dominated by the equal strengths of both teams, the W Hotels won the first leg of the in-shore regatta while the Estrella Damm took over the second. Such equality in forces adds excitement to the NY-BCN record, which will commence between April 5th and the 12th, depending on the weather conditions that skippers consider appropriate to achieve the fastest crossing possible. 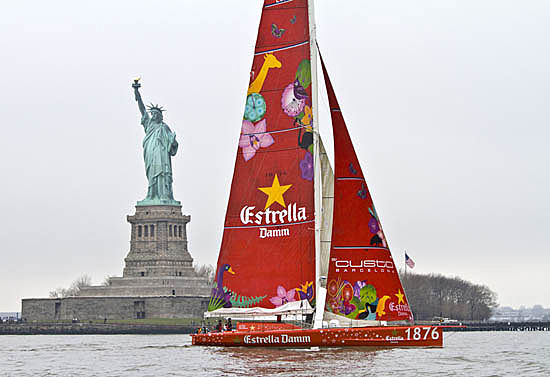 Organized by the Fundació Navegació Oceànica Barcelona (FNOB) in collaboration with the New York City Sports Commission and the support of the New York Yacht Club, the in-shore exhibition had the same IMOCA Open 60 that will attempt to set the NY-BCN Transoceanic Sailing Record: the Estrella Damm, whose skippers are Alex Pella, Pepe Ribes and the American, Stan Schreyer; and the W Hotels with Pachi Rivero, Toño Piris, and Peter Becker.

The sailing boats completed about 5 miles on each leg, with a starting point near North Cove Marina to a finishing buoy 0.3 miles to the south of the Statue of Liberty, with a turn to a third buoy 0.3 miles south of Governors Island and an arrival back to the previous buoy, returning to the starting point. With a temperature close to 65 °F the constant wind blowing from the southeast took a leading role with an intensity between 10 knots – about 11.5 miles per hour.

The boats departed around 11:00 A.M. ET to prepare for the first leg of the regatta, which began at 1:00 P.M. ET, while the second leg took place around 2:00 P.M. The two vessels took opposite sides: the W Hotels with Manhattan to starboard and the Estrella Damm with New Jersey. In the first crossing the W Hotels surpassed the Estrella Damm to reach the finishing point.

The strong current of the Hudson River and the intense maritime traffic presented difficulties to the skippers, whom had to increase precaution. In this sense, the Estrella Damm was the most affected with several boats crossing its way. Finally, in the first leg the W Hotels crossed the finishing line at 2:05 P.M. ET, three minutes and seven seconds ahead of the Estrella Damm.

Fifteen minutes later, the second and last leg of the regatta begun; in this leg, both vessels were close to each other at all time. At the first buoy, the Estrella Damm was able to take the lead from the W Hotels, but this was able to fight back, arriving only twenty-three seconds later. 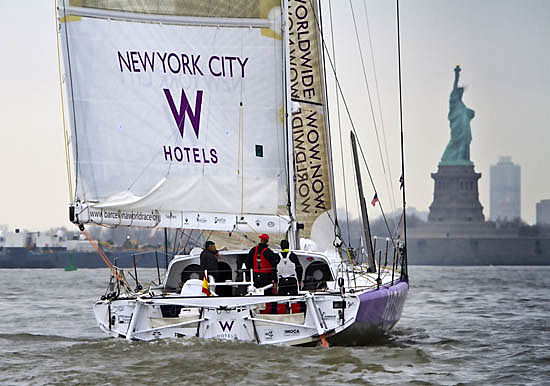 “The boats take very similar speeds; perhaps the only difference has been in the last stern, in which they got very close. We think that is because their downwind sail is a little bigger than ours is. However, we were very close to each other and I don’t think our opponent has any advantage over us in this record,” affirms Alex Pella, skipper of the Estrella Damm. “The regatta was complicated because of the traffic in the bay. We had to look everywhere to stay away from the ferries. We had luck that we didn’t have an accident,” said skipper Toño Piris.

Monday, April 5, 2010, started the meteorological window for the NY-BCN record, which will cover 3,750 nautical miles (4.31 miles) until their destination, Barcelona. However, the skippers are still cautious about the day of departure, “at this moment, it does not seem like Monday will be the day of our departure for the record; perhaps, it will be Tuesday or most likely Wednesday, which gives us a better forecast, although this may change,” says Pachi Rivero, skipper of the W Hotels team. “It is still too soon to know,” affirmed Pepe Ribes from the Estrella Damm vessel.

The Estrella Damm and the W Hotels are twin boats of the latest generation, both launched in 2007, which makes this competition a challenge between equals. The team that establishes the record NY-BCN will receive the trophy Príncipe de Asturias and Girona, especially designed for this record.