Home > News > Success for Tecnomar at the 2011 Beirut Boat Show

The 7th International Beirut Boat Show, located at La Marina Dbayeh, ran from the 18th – 22 of May, displaying the largest boats for sale in the region. The turnout and success of the show in 2010 prompted 75% of its 101 exhibitors to exhibit this year and it brought of many newcomers to the region. 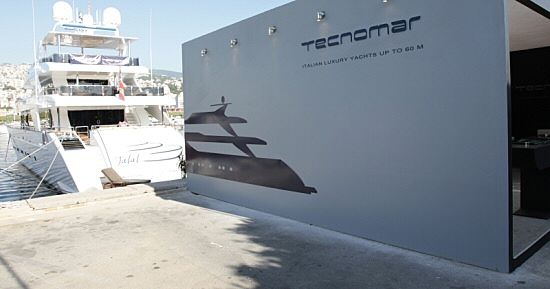 One of the shows successful exhibitors was the Italian based company Tecnomar, who had the largest boat on display, superyacht Talal.

Talalwas built entirely out of GRP at the Tecnomar yard with her interior styled by Study Luxury Projects of Ancona in collaboration with the owner and the yard. Her style is elegantly classic. The choice materials, such as different woods and marbles from the Middle East, played a fundamental role in the choice of other decorative materials like woven carpets, and handmade glass and Swarovski. The owner’s cabin is located on the bridge deck, and can be reached by a private elevator. Talal reaches a maximum speed of 27 knots, and cruises at 24 knots. She is powered by twin 3.654 hp 16VM90 MTU diesels.

Commenting on the boat show Francesco Carbone, Tecnomar Sales Director stated: “The number of visitors was quite interesting, and I must admit, unexpected. I was surprised, not only by the number of people who attended the show, but also the diversity and quality. The potential of Lebanese market remains remarkable”.