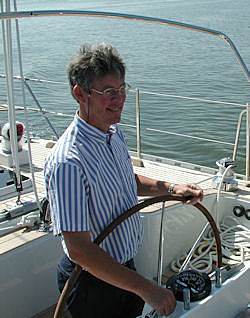 It is with great sadness that the Van Dam Nordia Shipyard in the Netherlands announces the death of naval architect Robert Willem van Dam on Friday 24 October. Robert leaves behind a wife, two children and four grandchildren.

After graduating from the Technical College Haarlem as a shipbuilding engineer and yacht designer, Robert joined his father Willem at the Van Dam yard in 1970. A few years he and his brother Adriaan took over the family company, and Robert focused on the design of the Nordia yachts.

More than 85 designs came from his hand over the next 38 years, many of which have set new standards in the sailyacht world. Robert was especially proud that the Van Dam yard was awarded the distinction of becoming a Purveyor to the Royal Household in 2006.

While coming to terms with this tragic loss, the Van Dam Nordia Shipyard will continue to design and build beautiful yachts under the management of Jacco Jongkind (Robert’s son-in-law) and Robin ten Hoope