Tuesday evening saw again, and for the 26th time, the award presentation of trophies for the participants of Antigua Classics, the largest of the Caribbean Classic regattas. Ahead of the prize-giving, the Copper and Lumber Store hotel laid on a tasty Caribbean buffet and barbecue against an impressive duo screen slideshow of photography, kindly donated by the many International and local photographers who attended this year’s regatta. 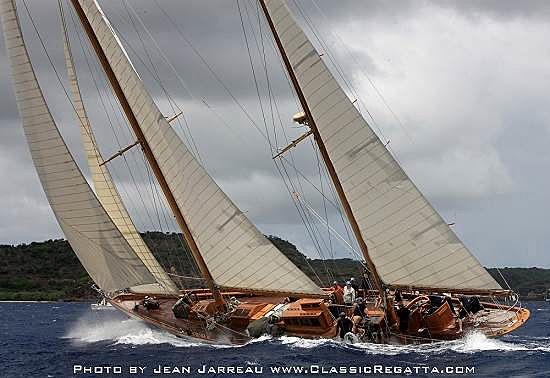 Regatta Chairman Kenny Coombs firstly thanked all participants for braving the strong conditions this year before thanking the race committee and all who helped stage the regatta out on the water preceding a big and much deserved thank you to all those ‘behind the scenes’ workers who help make such a successful event. Weather during the first days of the regatta was very windy and rainy with very dark skies but as from Sunday the sun was always present and winds in the 16-18 knots range made sure that picture perfect sailing conditions prevailed. Sponsors representatives from watch maker Panerai and Mount Gay Rum were welcomed on to the stage as was the Minister of Tourism for Antigua, who delivered a punchy and amusing welcome speech.

A new trophy this year, the John Leader Trophy – judged by the competing boats themselves - was presented to well know Richard West and his wife Maryse of Charm III from Anguilla, for their commitment to teach sailing to youngsters and others.

The regatta would not be the same without characterful ‘Old Bob’ and her crew who raised cheers and whistles from the crowd when collecting their second prize to Alice of Penrhyn’s first in Classic D Class.

Their own ‘Old Bob’ Trophy this year was awarded to Chloe May for losing her topmast and Malamok won the Comfort Zone Trophy for the best performance on the shortened courses.

The beautifully restored Dione won the Marine Power Services Trophy for the oldest boat in the regatta and the Woodstock Restoration Trophy and she also came first in Vintage Class C! A Special Prize of a bottle of Mount Gay Rum was awarded to her captain Alex for sailing 5,500 miles (3,500 miles to windward) from Buenos Aries in time to compete in the regatta!

Finally, providing a highly popular win for one of Antigua Classic Yacht Regatta’s most beautiful returning classic yachts “Sumurun” was also announced winner of the Wayfarer Marine Trophy, the Mount Gay Rum Trophy and then ultimately the prized Panerai Trophy – The Panerai watch Timepiece - for the boat with the Best Total Corrected Time. Surrounded by their crew on stage proud owner Bob Tobin and his captain Armin Fisher received their prizes to tumultuous applause ending another memorable Antigua Classic Yacht Regatta.

Construction on ISA Continental 80 under way

1 March 2021 09:45
New-Build
The production on the hull of the 79.9-metre yacht ISA Continental is reported to be well under way at ISA Yachts. The latest speculation project from the shipyard is ...

26 February 2021 11:45
Business
The Italian Sea Group has announced its application to list its ordinary shares on the Italian Stock Exchange. The final decision will come following checks on the shi...

26 February 2021 11:45
Business
After Tankoa Yachts announced in early January it was in the final stages of due diligence prior to acquiring Cantieri di Pisa, the Italian financial daily Il Sole 24 ...