Catamaran builder Sunreef Yachts has acquired the exclusive rights to market and build the design for a 40m powered catamaran that was revealed earlier this year by Design Unlimited and naval architect BMT Nigel Gee. When built it will be one of the largest powered catamaran in the world designed and constructed entirely for private recreational use. 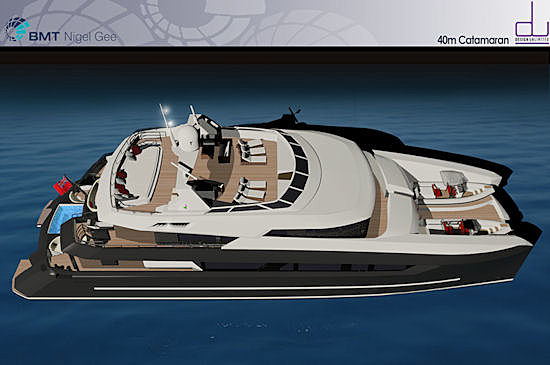 Sunreef Yachts is a builder of luxury catamarans, based in Gdansk, Poland, and its extensive range includes the sail‐driven Sunreef 150 which at 46‐metres overall makes it also the largest in its class.

In the ten years since its founding Sunreef has build over 50 craft and earlier this month showed its first 102 (31‐metre) double deck sailing catamaran at Cannes.

Now designated the 40m Sunreef Power Superyacht, the accommodation on board the Design Unlimited / BMT Nigel Gee craft is laid out across three decks and includes four double cabins as well as the full‐width owner’s suite. With a beam of nearly twelve metres the saloon and exterior decks offer space for relaxation and entertainment that conventional yachts of this length can only dream of, while a range of engine options can provide speeds of up to 40 knots and over 2,000 nm between fuel stops. A draft of just 1.9 metres also allows her to access shallow harbours and anchorages.