Home > News > Sunreef Yachts working on 120% of it's production capacity

The Sunreef Yachts shipyard is now working on 120% of its production capacity with 3 new models (Sunreef 80, Sunreef 82 and 60 Sunreef Power) under construction and 4 other units in built (2 x 70 Sunreef Power, Sunreef 70 Sailing and Sunreef 58 Sailing), which gives in total 7 units ranging from 19 to 24 meters in length.

The custom-designed wooden furniture has now been installed within the hulls of the Sunreef 82 Double Deck. The saloon is being fitted with the beautiful Bubinga finish, and the owner cabin located in the lower deck is almost ready, featuring a jardinière and a Jacuzzi. The flybridge is will soon be infused and added to the superstructure. Rudder blades and keels will be added to the hulls next week. 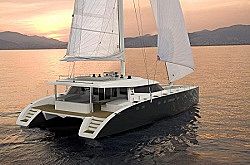 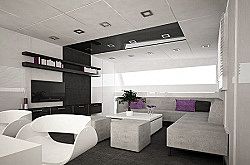 Commissioned at the end of 2011, the new sailing superyacht, Sunreef 80, is already officially under construction. The yacht will be made of an advanced composite sandwich combining vinylester and an epoxy resin mixture developed for the project by Sunreef’s engineers, PVC foam, glass fibre with carbon reinforcement for the hulls and carbon fibre for the deck and the superstructure, with a carbon mast and boom, standing rigging with Kevlar and total sail area of 340 m2, weighing just 45T lightship and 60T fully loaded. Sunreef’s engineering office produced a special weighing platform that will register all additional weight of the boat. All systems will also be optimized to minimize their weight.

After five months of intensive design finalizing, the building process has started. The infusion of the first hull has been performed two weeks ago and the second hull will be infused next week, followed by the infusion of the wet deck and bulkheads installation. For the first time, the hull is infused in a single attempt and not in two parts as previously. It means total infusion time of 1h 10 min to create a surface of 150m2. The yacht is due for launch in March 2013.