Sunseeker International is looking ahead to an exciting 2011 and kick started the year with the official launch of two new motoryachts at the Tullett Prebon London International Boat Show. The all new Predator 115 and the Manhattan 73 were officially launched at 12 noon on Friday 7th January 2011 on the Sunseeker stand (L20) by Sunseeker Founder Robert Braithwaite. 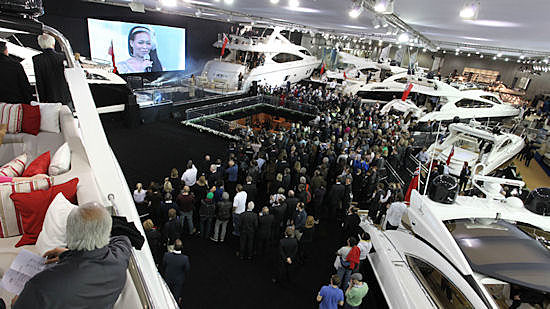 Throughout the exciting launch on the Sunseeker stand, Rebecca Ferguson, who secured second place in the latest series of the popular reality-TV talent competition X-Factor, performed three songs that she sang on the X-Factor. The 24-year old singer from Liverpool wowed the crowds with her elegant vocal performance.

Sunseeker Founder, Robert Braithwaite, said: “These stunning new Sunseeker vessels are set to attract a huge crowd at London, as did Rebecca Ferguson who was absolutely fantastic.

He continued: “The global launch of these two new vessels is a great start to what is set to be a promising 2011 for Sunseeker. We are incredibly proud to now be exporting to five continents and 61 countries, and like Rebecca, Sunseeker is on course for a fantastic year ahead.”

Sunseeker are also displaying ten other Sunseeker vessels at the show including the 40 Metre, the firm’s flagship, and the 30 Metre on the pontoon (Berths P2 and P3), and the 88 Yacht, the Predator 64, the Predator 84 and the Portofino 48 on the Sunseeker stand (L20).