Sunseeker International’s new flagship tri-deck 155 Yacht has entered the water for the first time on the 10th of February 2014, where it will undergo commissioning before starting sea trials later this month.

Following the required pre-launch setup procedures on the quay side at the shipyard in Poole at the end of January, the 155 Yacht was on view for the very first time for all to see. A significant stage in the boat’s development, the 155 Yacht was then ready to enter the water for the first time. 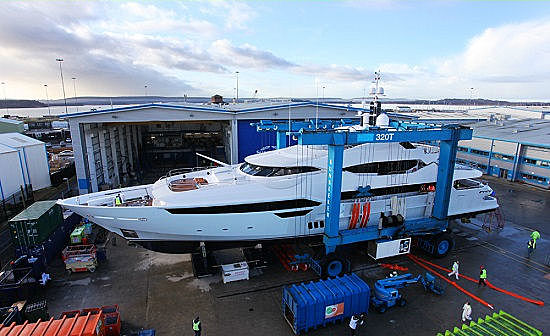 The 155 Yacht was launched in Poole Harbour, where Sunseeker International is headquartered. Further basin trials will then be performed prior to full sea trials.

This intense testing phase is expected to last two to three weeks and will see the team put the 155 Yacht through its paces. This is a critical point in the commissioning stage where all major systems are commissioned and tested to full capability and it also ensures everything operates to the high Sunseeker standard. 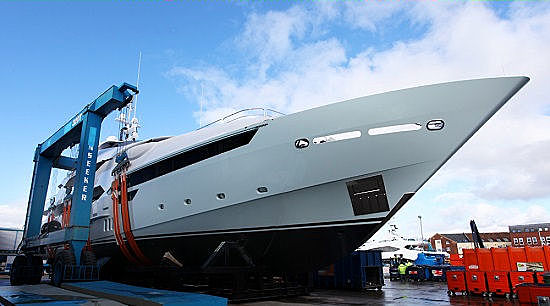 When the Sunseeker team is happy with the 155 Yacht’s initial performance in the water, it will be further assessed in the sea trial stage before being delivered to its owner in the early spring. Commissioned by Formula 1’s Eddie Jordan, the first 155 Yacht has been the talk of the town since it was first announced. What’s more, Eddie Jordan has taken advantage of the bespoke element of this Super Yacht and embraced every opportunity to stamp his unique marque on it.

Stewart McIntyre, Managing Director at Sunseeker International, commented: “This is an extremely exciting time for Sunseeker as we inch ever closer to the completion of the 155 Yacht. This is the biggest project we have ever undertaken and since the announcement of its build it has been the talk of the industry. We are incredibly proud of what we have created and look forward to showcasing it to the world.”

The 155 Yacht is the biggest project ever undertaken by Sunseeker International and is the first ever semi-displacement, round bilge hull design from the company.