Luxury motoryacht builder Sunseeker International is celebrating the recruitment of its 2,000th member of staff following the recent appointment of skilled deck fitter Graham Perryman (48) at the company’s shipyard in Poole, Dorset. Sunseeker’s on-going recruitment programme and continued planned expansion in Dorset further reinforces the company’s position as one of the region’s largest employer and world’s largest privately-owned yacht builder. 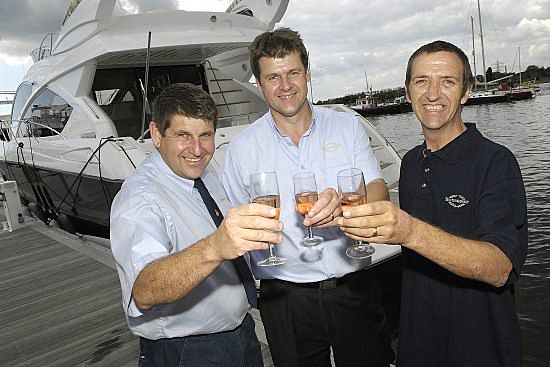 A champagne celebration to mark this was held by the company’s operations director Wayne Moore on behalf of founder and managing director Robert Braithwaite, who was recently awarded a CBE in the Queen’s Birthday honours. Also present was new recruit Graham Perryman from Swanage, and Dennis Barnes one of the company’s longest-serving employees. Dennis joined as an apprentice in May 1978 over 29 years ago and is now site production manager at Willis Way, one of the company’s 7 shipyards in Poole.

At the beginning of his new career at Sunseeker, Graham Perryman is delighted to be working in a job which demands exceptionally high standards. ‘Currently, I work on the decking for the 90 Yacht and to see the work come together as I do my job is great. I’m really impressed with the product, no question. I’d had other job offers, but had set my sights on certain standards. There’s always room for improvement of course but the standards here are so high’, he said.

Skilled craftsmen of the calibre required by Sunseeker are much in demand and, for this reason, the company truly values its workforce. Furthermore, the signs are that Sunseeker’s workers feel appreciated, because staff retention is high and people’s pride in their work shows in the finished product. To maintain the future growth of its workforce, Sunseeker offers excellent benefits and working conditions, and is a major investor in the Marine Skills Training Centre in Poole.

Reflecting on nearly 30 years with the company, Dennis Barnes has witnessed many developments at Sunseeker. ‘In addition to changes in both style and quality in boat building at Sunseeker, the engines have got more powerful and what a difference in performance’, he said.

The company started out from modest roots and has grown to become one of the world’s leading producers of luxury, performance motoryachts, firmly positioning itself as an internationally renowned brand. Today, it is one of Poole’s most prominent businesses and biggest employers. Designing, developing and manufacturing its entire portfolio of luxury motoryachts in Dorset, it now employs 2,000 staff at its offices and shipyards and there appears to be no sign in the growth of the company slowing down.

Such substantial growth in recent years and continued success in building the business further has also been recognised recently by the Queen’s Awards for Enterprise, the UK''s most prestigious awards for business performance. Presented for significant growth in overseas earnings and commercial success, the Queen’s Award is an independent and prominent endorsement of the company’s sustained achievement in international trade to levels that are considered outstanding for the size of Sunseeker''s operation.

Winning the Queen’s Award for the fifth time Sunseeker increased its exports by over £50 million in three years. Practically all of the company’s production is exported and it now sells to over 40 countries worldwide. Main markets are in Europe, the Far East, the USA and Australia. In the last three years its sales have totalled over £605 million and the company has created 560 additional jobs.

More recently, the company completed moulding its first motoryacht at Osprey Quay, Portland just 10 weeks after acquiring the new manufacturing facilities as part of the company’s continued growth. The new site is being extensively used to accommodate Sunseeker’s planned expansion with permission to use the facilities for production of the larger models.

The Sunseeker team working on the site consists of new recruits and local workers who previously commuted to sites in Poole. There are currently 45 skilled staff employed at the Osprey Quay base and this number is expected to increase to as much as 500 in the next four years.

Earlier this year, Sunseeker officially launched the new 37 Metre Tri Deck Yacht, the company’s largest and most ambitious build and the largest semi-custom production motoryacht ever to be built in the UK.