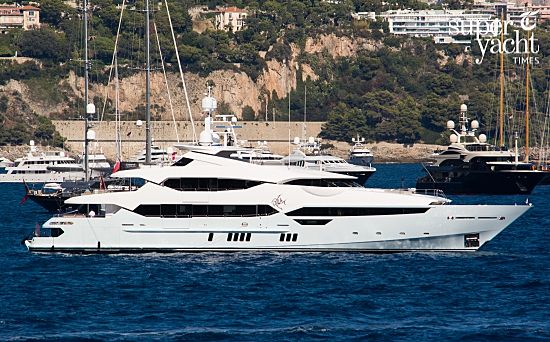 Pictured here on the penultimate day of the Monaco Yacht Show is the 47.25 metre superyacht Blush, built by the British shipyard Sunseeker in 2014 for Formula 1 driver Eddie Jordan. Featuring an ice blue hull, she is the largest superyacht project to come out of Sunseeker.

She accommodates 12 guests on board over several luxurious, spacious staterooms, including two VIP cabins on the main deck which boast floor to ceiling windows. A crew of 10 are also accommodated for on the lower deck. While her accommodation is one of the most appealing features of Sunseeker’s flagship yacht, it is the expanse of entertainment space which makes it stand out. The upper deck alone features a huge sky lounge which can be dedicated to private entertainment.

Blush will be in Monaco for the duration of the show, which draws to a close tomorrow.