Filip Balcaen’s 112-ft Supermaxi Nilaya has claimed line honours at the 2012 Rolex Volcano Race following an enthralling Leg Two of the offshore race. Nilaya was the first boat to complete the 300-nautical mile course, arriving to a glorious sunset in Capri, after a challenging voyage through the Aeolian Islands in the Tyrrhenian Sea. She arrived at 20:05.06 CEST this evening, completing the race in one day, two hours and six seconds. 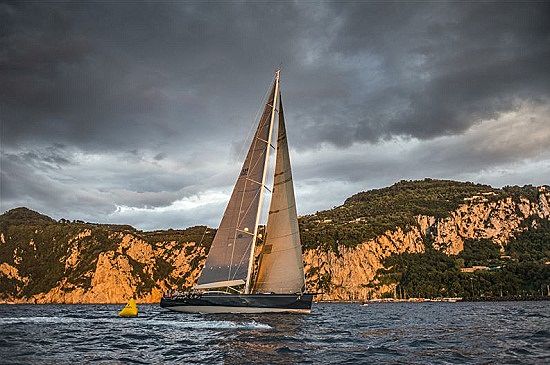 “We had an awful start,” reveals Balcaen, who helmed the fastest boat. “Nilaya is a big boat which doesn’t react very quickly when there is no wind. Afterwards the first part down to the islands saw quite strong winds (39 knots was the highest speed recorded) which then increased all the time.” It was here that Nilaya temporarily moved in front of her determined rivals.

“Jethou then moved ahead of us when we were within the islands,” continues Balcaen, “and once we reached Stromboli the wind died almost completely. However, soon afterwards we passed Jethou and Y3K stayed behind us for the rest of the time.” Guided by the expert tactics of Bouwe Bekking, Nilaya hung on to her lead. Y3K eventually finished 18 minutes after Nilaya with Jethou a further 23 minutes behind. Nilaya’s line honours success joins her class win at the Maxi Yacht Rolex Cup in 2011.

Two crews - Ismec (ITA) and Wild Joe- were forced to retire from the race. With eight yachts still out at sea, the overall winner of Leg Two will be revealed in the coming hours. They will be awarded the coveted Rolex Trophy and timepiece during the traditional Rolex party at the iconic La Canzone del Mare, held on Friday 25 May.