Held from the 29th January to the 1st February, this years annual Antigua Superyacht Challenge was hosted by Admiral’s Inn and Antigua Rigging in association with National Parks Antigua. Celebrating its fifth edition this year, a total of 11 yachts competed in total, with the 55.50 metre superyacht Adela proving victorious. 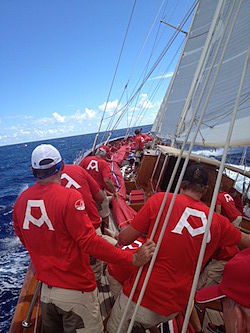 Amongst the Pendennis built Adela’s competitors was another vessel built by the British shipyard, the 42.42 metre Rebecca, as well as the 38.40 metre twin masted schooner Gloria. Gloria also has connections with the Pendennis shipyard, undertaking several extensive refit projects at their facilities in Falmouth over the years.

The eleven vessel fleet took part in three days of pursuit style racing following the International Superyacht Racing Rule, the same rule that is applied to the biennial Pendennis Cup.

Pendennis comments on the winning performance of Adela, stating, “We are delighted that Adela not only won her class in the 2015 regatta, but also finished as winner overall. Rebecca and Gloria, who won Class 3, also competed exceptionally well during the weekend.”