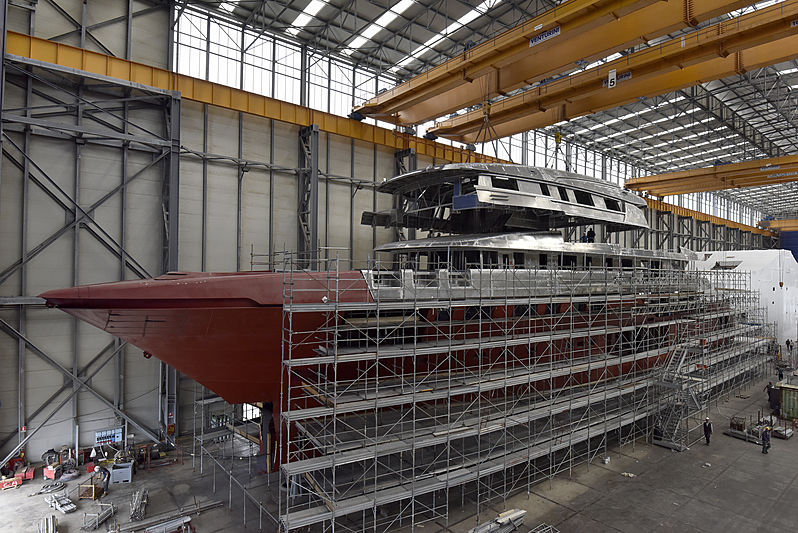 Photo: SanLorenzoIt’s easy to forget that Sanlorenzo is a relative newcomer to metal boatbuilding. Yet just 12 years after the launch of the first 40Alloy in 2007 (and despite the economic downturn that followed) it has delivered 25 steel or aluminium-hulled yachts and is working on 14 others at its superyacht facility in La Spezia. As the new flagship of the Sanlorenzo fleet and one of the highest volume yachts in her class, the 64Steel Attila is far and away the biggest and most ambitious of these new-build projects.

“At 1,600 gross tons Attila is three times the volume of the 52Steel and 400GT more than the 62Steel, her smaller cousin also in build here in La Spezia,” says Antonio Santella, Vice President of Sales & Marketing for Sanlorenzo’s superyacht division. “Building over 500GT brings with it more complex regulations and management challenges, but it’s something we’ve been moving towards and a lot of our technical and production staff come from big boat backgrounds.” 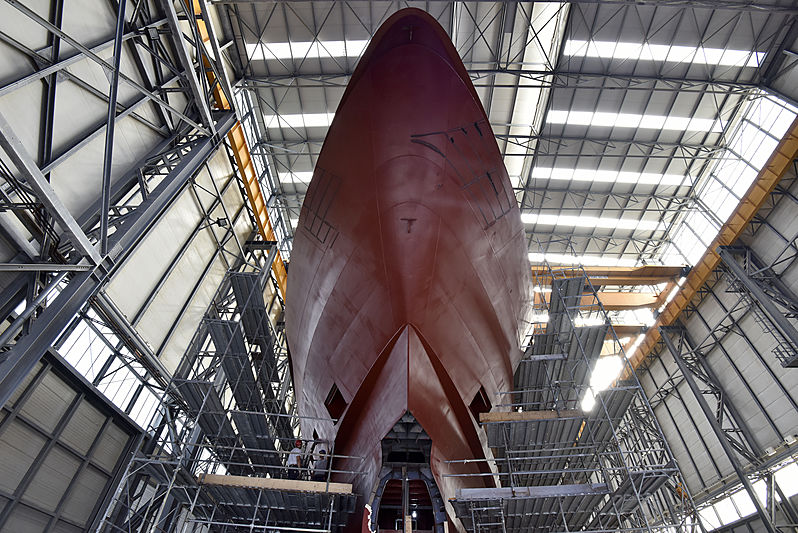 Photo: SanLorenzoLuca Ghirlanda, Production Director in La Spezia, is just one example. Having spent four years with Benetti working on steel superyacht projects before joining Sanlorenzo, he points out that being released from the confines of the 500GT threshold has made the building of Attila more straightforward in some ways.

“I remember it was a huge challenge to keep Seven Sins, the first 52Steel, under 500GT,” he says. “Generally speaking, building Attila has been a much smoother process, in part because there’s so much more technical space to work with and we didn’t have to squeeze out every last cubic centimetre of volume.”

Attila’s five deck levels (plus an under lower deck) and 12.5-metre beam provide the space for a layout and facilities more commonly found on larger yachts. For example, all four guest cabins and the full-beam VIP suite are located on the main deck; there is a private owner’s deck above the bridge deck and three pools; two side-loading tender garages are positioned amidships, one of which will house a 10-metre Van Dutch limo tender (the MOB tender has its own garage in the bow behind the covered mooring deck); the under-lower deck has walk-in cold storage, a refrigerated garbage room, a media room for the crew, a capacious laundry and a climate-controlled “wine cave” with storage for up to 500 bottles. 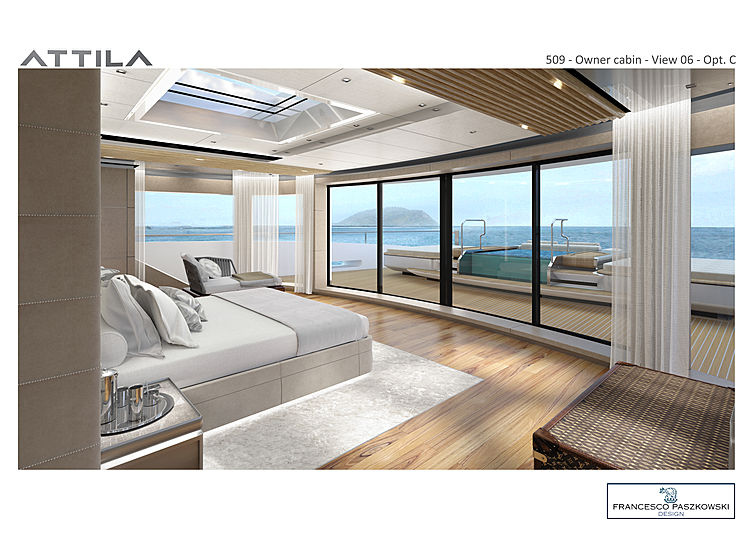 Photo: SanLorenzoMoreover, there are two service stairs for crew use and a shell door for provisioning behind the galley on the lower deck with a service lift for the rapid transfer of cold and dry goods to the storage rooms below.

But in terms of owner and guest amenities, the highlight of the layout is the main deck aft and the beach club on the lower deck. Instead of the customary formal salon and dining room, Attila has a lounge-come-cinema room adjoining a casual dining area with bar and sliding glass doors on three sides, which overlooks the five-metre long swimming pool on the open aft deck. An unusual design feature is the double staircase leading down to the beach club equipped with sauna, hammam, massage room and gym. With the transom and side platforms deployed, the beach club covers an area of 78 square metres.

“The rationale behind the layout was to integrate the main deck aft and beach club as much as possible,” says Santella. “Hence the interior access to the beach club and teak decking in the dining area that blurs the boundary between inside and outside. There’s no doubt the social life on board will revolve around these two areas.”

Another key feature, which also hints at the owner’s nationality, is a massive barbecue pit in the main deck dining area. The South American-style barbecue or asado is a hugely popular family custom in Argentina and the custom-built parilla grill was an early request of the owner, who hails from Buenos Aires. Having an open fire in an enclosed space posed something of a challenge for the production team, as the stainless steel had to be A60 fire-rated and fitted with its own its own smoke extraction system.

While touring Attila, it quickly became clear that in terms of functionality and operation the yacht has been planned on big boat principles. This mentality is reflected in the accessibility of the technical areas and two-tier engine room, the completely independent crew/guest circulation, the spacious wheelhouse with a walkway in front of the bridge console and adjoining captain’s cabin, the large laundry and crew facilities, and the pro-spec Zanussi galley complete with pizza oven. 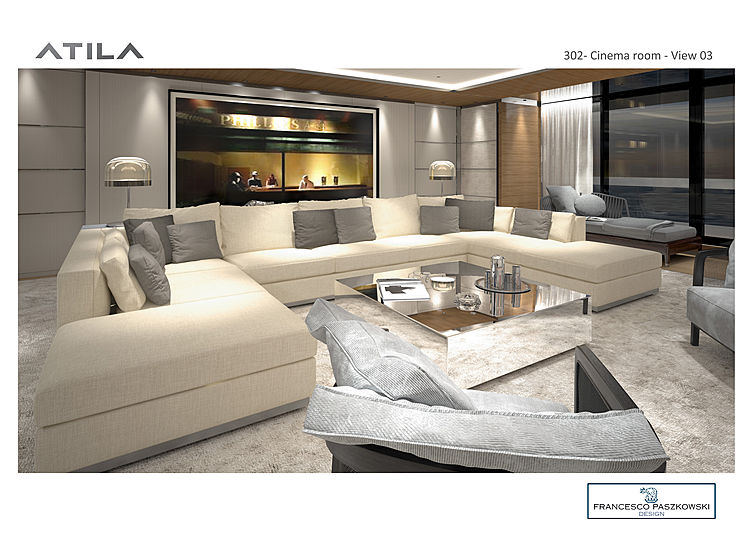 Attila’s exterior has been styled by Officina Italiana Design to retain Sanlorenzo’s signature grace, and at the time of our visit had already received its coats of metallic grey and pearlescent white paint. The inside was a hive of activity with outfitters from Yachtline busily installing the interior designed by Francesco Paszkowski based on refreshing white oak and warm brushed teak. Sitting next to Attila in the build shed was the first 62Steel. Due to launch in 2020, the yacht has one deck less than the 64Steel, but retains many of the same key features. Once Attila vacates the shed at the end of March for her technical launch, a second 62Steel will take her place.

The 64Steel platform is designed so it can be extended to 70 metres and Sanlorenzo has received serious enquiries up to that size. The superyacht facility in La Spezia has a capacity to build well over 100 metres, but Santella maintains the brand has no intention of going beyond 70 metres – and not just because of stiff competition from rivals like Heesen Yachts.

“The bigger you build, the more variables you introduce into the equation,” he says. “Our philosophy at Sanlorenzo has been to produce series yachts that are customisable but based on fixed technical platforms in order to control time, quality and cost. Once you go over 70 metres, it becomes much harder to maintain that control.”

But never say never. When Sanlorenzo delivered its first aluminium yacht of 317GT some 12 years ago, who would have thought it would be about to launch a 64-metre steel and aluminium flagship of 1,600GT? 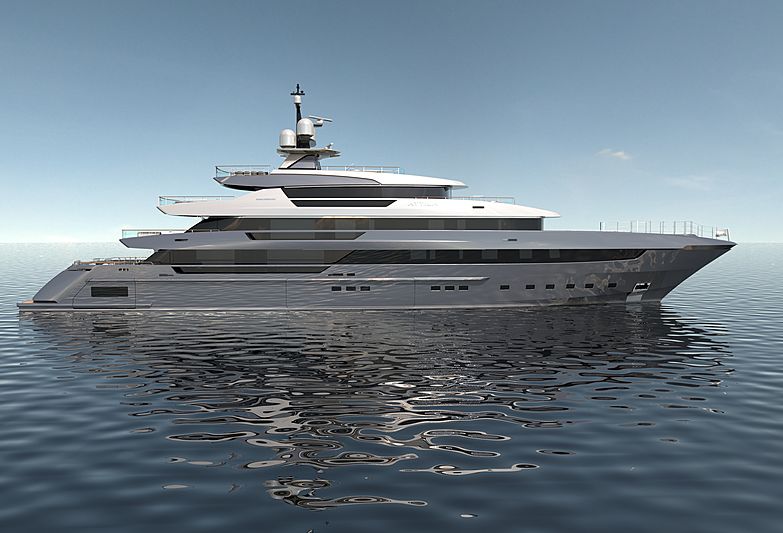 Photo: SanLorenzoFriendship Matters: Sitting down with the owner of Attila

Mauricio Filiberti, the owner of Attila, is a repeat Sanlorenzo client whose previous yacht was the 46Steel Achille delivered in 2012. The Argentinian industrialist has been closely involved in the design and build of his new yacht from the start. SuperYacht Times caught up with him during one of his regular visits to the shipyard in La Spezia. 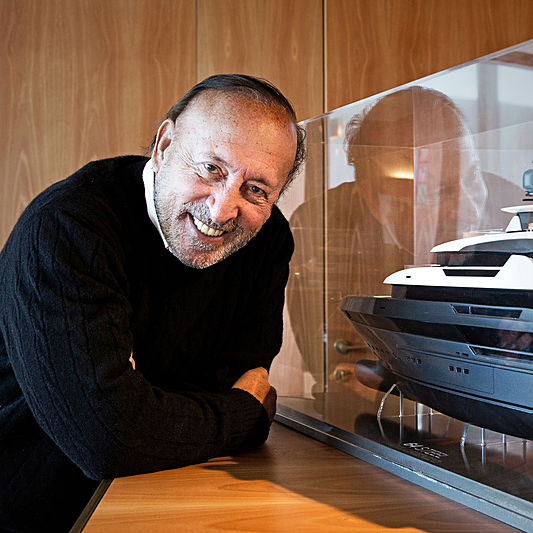 Why did you decide to move up in size with Attila?

One of the main reasons was because I wanted an owner’s deck and a full beach club. More than three decks on a yacht under 500GT and the superstructure starts to get too high, which leads to stability issues, while a beach club on smaller boats can have problems of shipping water because the platforms are closer to sea level. Sixty-four metres is perfect for my needs: up to that size is a pleasure, any bigger and it gets more difficult to manage and can become more of a pain than a pleasure.

Was Sanlorenzo always your first choice of builder?

In my private and business life, I value friendship and like to stay with the same people. Building a yacht is a business proposition and it’s difficult to make friends in business, but it’s also a question of trust. I’ve known Massimo Perotti, the ‘Cavaliere’, for many years now and having built my previous boat with him, the trust was already there and I knew Sanlorenzo could build me a beautiful boat. 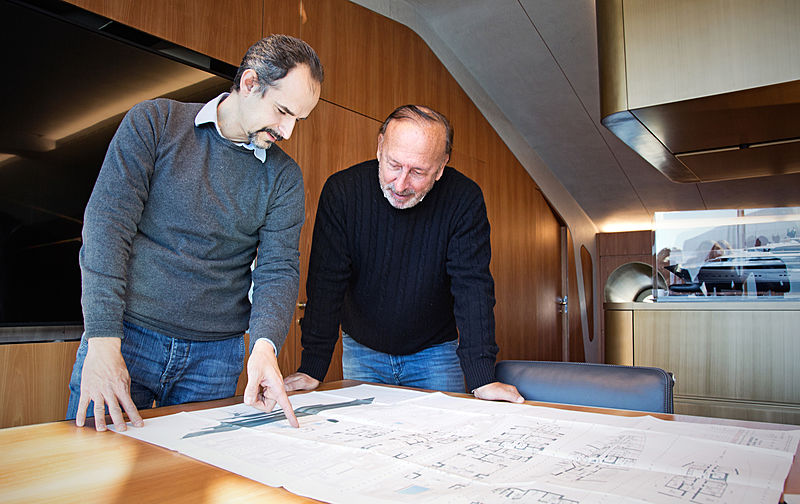 Photo: Justin RatcliffWhat was it in particular that attracted you to the 64Steel?

I loved the connection between the dining area on the main deck aft and the beach club. Formal dining rooms on yachts are a waste of space because they are hardly ever used. Instead, on Attila we can go straight from the pool to the dining area and enjoy an asado all together as a family, without worrying about sitting around in damp swimming costumes. Along with the beach club, this is going to be the social centre of the yacht. If the adults want something a bit more formal in the evenings, we can use the lounge and dining room on the bridge deck, or even the sundeck.

I much prefer to stay on board in a quiet bay somewhere and I’ve never understood why owners rush ashore as soon as they’ve dropped anchor. Although I should add that my wife likes to shop! Because of the size of Attila we’ll be anchored offshore most of the time anyway, but that’s fine with me. She’s not the kind of yacht you use for just a couple of weeks in the summer – if that was the case, I would charter her. No, I’d like to be able to spend six months aboard spread between the Mediterranean and the Caribbean seasons. The problem is finding all that time away from work!

11 March 2019 16:00
Business
With the yachting calendar in full swing for 2019, SuperYacht Times is delighted to announce that the March/April issue of The SuperYacht Times newspaper has been rele...

14 February 2019 14:00
Design New-Build
Sitting at 47-metres long, the Sanlorenzo explorers were specially developed by a research and development team to be “off-road superyachts.” Following the success of ...

On board with… Hugo Verlinden, Seven Sins

31 January 2018 09:00
Travel
It’s not every week that the SuperYacht Times team are treated to a real onboard experience, but 2018 kicked off to a fantastic start with a taste of the superyacht li...