By the time superyacht Big Fish picks up her first summer charter this June in Sweden, she will have logged more than 35,000nm, the equivalent of 1.5 times the distance around the world at the Equator. All this in 10 months since her delivery last July in Auckland, New Zealand. The superyacht is currently in Miami enjoying her first haul-out and bottom painting since leaving Auckland. On May 2 she will depart Jones Boat Yard on the Miami River and move to Fort Lauderdale for refit and warranty work. Big Fish will be open for viewing by press and brokers May 21-23 at the Sails Marina in Fort Lauderdale. 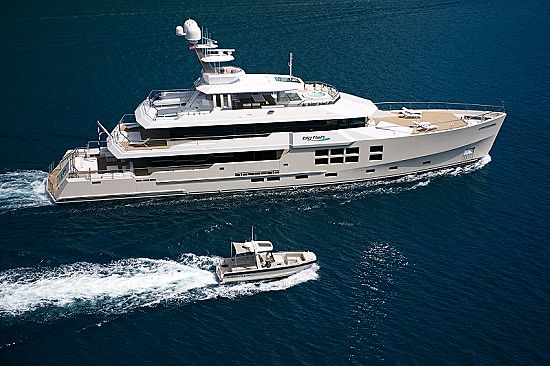 “It’s just amazing,” says the yacht’s skipper, Capt. Winston Joyce Clarke. “Except for a minor nick in a propeller, which we probably got from a submerged log in the mouth of the Amazon, the bottom of Big Fish is in perfect condition. This, despite being in the ice for four weeks, and logging more than 28,000 nautical miles!” 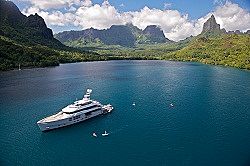 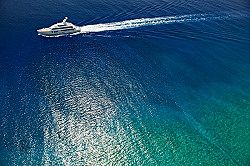 With more than 100 days of use between charters and owner visits, Big Fish was ready for some regular refit and maintenance work. “We are really pleased with the performance of the boat,” he said. “Not once since we took delivery have we missed a charter or owner date, or been delayed in any way by mechanical problems.”

Big Fish’s charter listing agent, Allan Jouning of 37South in Auckland, NZ, said he is very pleased with the overwhelming success achieved by the boat in the charter market. “From the start we anticipated there would be a strong demand, despite the weak existing charter market, for a boat that could offer both true luxury and adventure cruising in remote destinations. Not only have we exceeded our optimistic annual projections in just her first nine months, but every single one of our past guests is requesting new dates for the coming year. I know of no yacht – and certainly no brand-new yacht – that has booked more weeks or grossed more revenue in the past several years.”

One significant departure from her previous cruising plans is the decision to forego attempting the first yacht crossing of the NorthEast Passage this coming August and September. The decision was not taken lightly, according to Richard Beattie, the yacht’s owner and chairman of its builder, Aquos Yachts. It was made, he said, strictly for strategic and commercial reasons and on the strong advice of its newly-appointed central listing agency, YCO.

The most important factor in the decision, Beattie said, was the conflict between attempting the historic passage and attending the upcoming Monaco Yacht Show. “We simply couldn’t do both,” he said, and in the end we had to bow to the commercial imperative of giving potential Aquos Yachts clients in Europe, the Middle East, Russia and elsewhere the opportunity to visit Big Fish. “During the Fort Lauderdale show we had more than 1,500 visitors aboard Big Fish,” Beattie said. “It was an overwhelming success and helped put the boat, and Aquos Yachts, on the map. But half the yacht market has yet to experience what we are trying to achieve with our next-generation yachting concept and in the end we owed it to ourselves to take advantage of showcasing our ‘go-anywhere in barefoot luxury’ philosophy to those who have not experienced it first-hand.”

Big Fish will, however, voyage into the Arctic Circle later this summer – likely taking the rarely-traversed Canal north from St. Petersburg through the beluga whale-filled White Sea – to complete in spirit, at least, the intentions of the original itinerary.

The yacht’s owner and chairman of its builder, Aquos Yachts, Mr Beattie stated:

"We did not take the decision to forego the Northeast Passage lightly. It was made after much discussion among the Aquos Yachts team, which now includes YCO, our new central listing agent for Big Fish. Ironically, what finally made me comfortable with this decision was the realisation that we have completely proven what we initially set out to do nine months ago, when we left Auckland Harbor for Big Fish’s first stop in Tahiti. We have drawn major accolades from the world yachting press, drawn rave reviews from more than 1500 visitors aboard the boat during the Fort Lauderdale boat show, cruised to some of the most remote areas in the world, including a month in Antarctica, and cruised more than the entire circumference of the planet at its widest point, the Equator, without a single delaying system failure. As Big Fish’s owner -- which makes me her harshest critic as well as her most ardent supporter – I can honestly say she has nothing left to prove. I have spent almost two months aboard since she was launched and I can unabashedly testify to her comfort, seaworthiness, mechanical integrity, luxuriousness and her capacity to offer to me the kind of yachting experiences I had always dreamed of having and sharing with my family and friends.

But as a successful businessman I realise that the only way to any commercial success is developing the market for my products and services. Had we taken the Northeast Passage, for which we were on the verge of receiving full permitting (at considerable expense), we would have ended up halfway around the world from a major portion of the yachting market who had never stepped aboard Big Fish.

With another Aquos Yacht (50M, six-stateroom StarFish) less than 18 months from delivery, our team – with my full support – came to the proper strategic conclusion that the best interest of Big Fish and Aquos Yachts, could only be served by bringing the yacht to Monaco this coming September. Along with the rest of my team, I am deeply and personally disappointed at missing the opportunity to do what no luxury yacht has ever done before. For those of you who have supported our program and encouraged our attempt to make yachting history, my team and I offer you our deepest apologies for this change of direction, and our sincere hopes that you can appreciate the importance of the rationale behind our ultimate decision”.