Calliope is a 43 metre, semi-displacement motor yacht launched in the summer of 2010 by Holland Jachtbouw, she’s spent her first few weeks cruising the Fjords of Norway. She was commissioned by the owners of the 32-metre fly-bridge cruiser Cassiopeia, also built at Holland Jachtbouw with Langan Design Associates in Newport Rhodes Island. 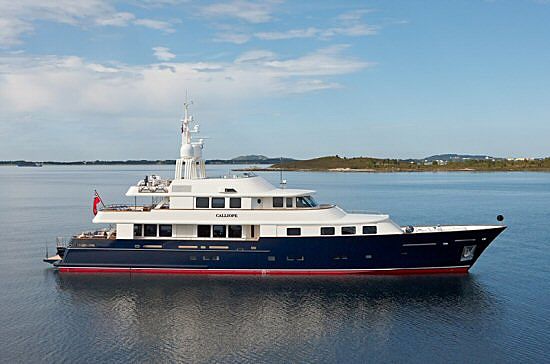 Langan’s design brief was to scale up Cassiopeia by adding range. More exterior living areas and two additional staterooms while keeping the look of a traditional yacht. Her splendid interior by Rhoades Young has been laid out and styled to the owners requirements and is perfect for formal entertaining as well as relaxing in comfort.

The star points of the design are in the three decks and a blue hull, the profile was to be masculine rather than a swoopy profile, according to the late Bill Langan, who sadly died on 31st December 2010.

The client was delighted with the quality that he had perceived and experienced during his extensive cruising on Cassiopeia and was determined to invest even more money and time in pushing the window further in terms of upgrading the technical aspects of his new project. 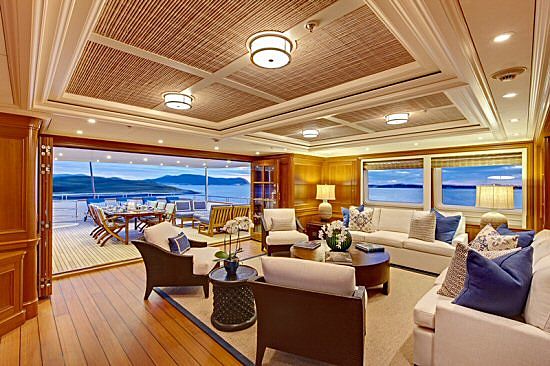 The interior of Calliope was inspired by the idea of juxtaposing an elegant classical architecture with carefully chosen modern furniture. Working closely with the owner, Rhoades Young developed a classic language for the cabins by taking the inspiration of French Chateau architecture with its elegant curves and flowing lines and rationalising it into a calm but rich background on which the loose furniture sits.

The wood for the cabins is a weathered limed oak, which whilst looking beautifully finished allows you to appreciate the grain and life of the timber, lending a rich patina and life to the interior. The loose furniture for the yacht has been custom designed by Rhoades Young and is designed for its specific location and use. It has an eclectic feel encompassing everything from large slabs of slate and oiled sleepers in the saloon to finely detailed rosewood desks in the owner's library completing the relaxed and informal feel onboard.

The most unusual central feature of the yacht is a pair of offset reverse spiral staircases, which create a dynamic connection to the three decks. By offsetting the stairs Rhoades Young has created vistas up through the sweeping undersides of the steps creating a dramatic centrepiece to the yacht and a testament to the quality of craftsmanship onboard. 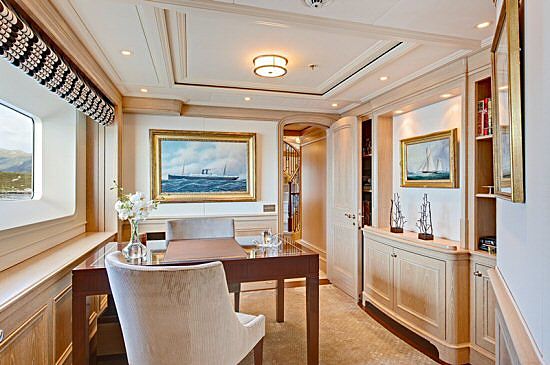 At the base of the staircase is the lower guest accommodation arranged symmetrically around the circular lower lobby in four cabins. The cabins use the curve of the staircase to create soft curved geometries mirrored by curved desks outboard with cleverly designed bathrooms which create the illusion of space by extending eyelines and creating focal points of art.

The main deck consists of a lower saloon and dining area, with a hidden sliding shoji screen separating the two spaces for a more intimate dining experience. This area epitomises the delicate balance of classic architecture and modern furniture through which Rhoades Young hope to create a very relaxed and comfortable area in which to watch the world go by. The Owners cabin is forward of the main lobby with a private library, full beam lounge area and separate bathrooms with attached walk-in wardrobes. This area is flooded with light from the large portlights and creates a strong visual connection to the world outside.

On the bridge deck, the interior changes to teak. The upper saloon utilizes full beam folding sliding doors to create a strong connection to the outside deck blurring the division between interior and exterior spaces. The furniture has more of an Indonesian feel and the resulting area is designed to be a relaxed informal area perfect for balmy summer evenings at anchor. 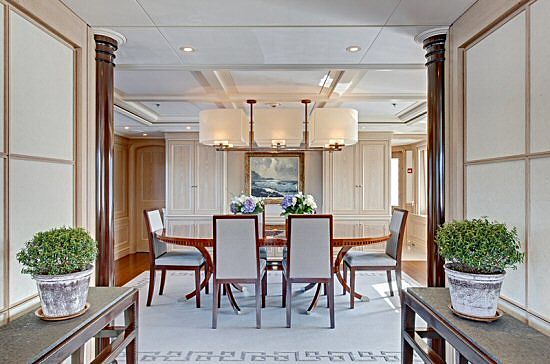 Forward of the upper saloon lobby is the Captain’s cabin and bridge. The latter includes a ship's office, which can be separated by a sliding screen. A raised seating area is designed to match the eyeline of the helm seats affording good views out and allowing the seats to swivel to become a flexible social area. As with the remainder of the yacht the bridge has a juxtaposition of styles with classic teak architecture and a highly modern forward bridge console finished in leather and Rosewood with floating screens.

Above the bridge deck is an expansive sun deck, made possible by locating the owner’s dinghy on the foredeck. The sun deck features a Jacuzzi as the focal point surrounded with seating and large sun pads for comfortable relaxation. This deck also includes a large settee area for casual conversation.

On the owner's behalf, the construction of Calliope was overseen by Nigel Ingram of MCM.