The partly built 45.42m superyacht Alpha was sold earlier this year by Fraser Yachts to a new owner. The project started out at Newcastle Marine, who finished her to about 75%. It now appears that her new owners have taken the yacht to the Derecktor yard, where she was recently launched as Carson. 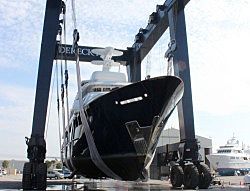 The original design by Murray & Associates featured five staterooms for up to 14 guests, and an elevator serving all decks. The yacht was designed to have a wood-burning fireplace onboard, and her interior was to feature honey-colored teak. It is not yet known, if the new owner made any changes to this original spec.

The yacht is powered by twin 1,100hp Caterpillar engines.

It appears that the yacht is not yet fully completed, and that she will now enter a new phase of her construction.