Motor Yacht Equinox is a concept design born from a conversation between yacht Designer Andrew Trujillo and Naval Architect & Designer Adam Younger. Adam Younger is very well established as a designer of seriously fast vessels of all sizes, so project Equinox (as we decided to call her) hoped to combine Andrew’s experience in designing luxury super-yachts (interior design and exterior styling) with Adam’s knowledge and know how. 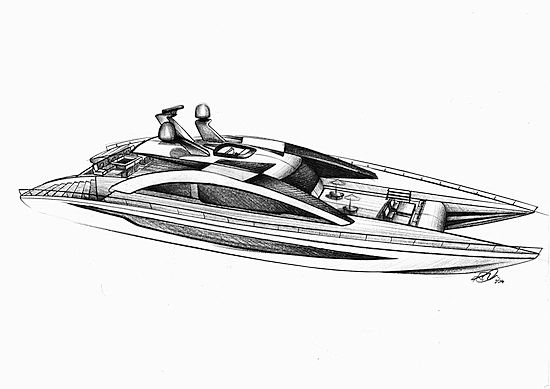 Andrew Trujillo says: “Some months back, Adam and I were talking about the possibility of collaborating on a conceptual project. Our conversation led us into discussing the fact that many motor catamarans tend to be practical yet often lack visual excitement. So we decided to design a 45M fast catamaran that was exciting both in terms of performance and looks, yet retained the practical elements. I set out to capture much of the excitement present on the racing catamaran speed boats that Adam has designed, but interpreted on a 45M Luxury Motor Yacht platform. I felt that it should appeal to a clientele that might normally be attracted to a fast Italian flybridge motor yacht. Perhaps she would carve a new niche. At the same time I sought to produce a design that was fresh and was suited to a catamaran. You can view many catamarans from some angles and they just look ungainly. I hoped that with this design we could move the design language of catamarans on, towards a sleeker, edgier direction.”

"The possibilities that open up with a catamaran both in terms of performance and layout are very interesting. Essentially, you approach the internal space offered on a 60 metre monohull motor yacht, on a yacht of length of 45M overall".

“However, as the project progressed, I came to realise that the hulls that Adam had designed were not only aimed at performance and comfort on the water, they offered lots of internal space. This came as a welcome surprise as I was designing the internal layout. I was expecting to have to make many compromises when designing the cabins and areas to be situated on the pontoons, but no, I had plenty of room to spare, it was a real dream.”

The engines are not located on the pontoons, as would be the convention, but above the central tunnel, which liberates lots of space for accommodation. It would though, require the yacht to be either diesel electric or to use hydraulics to propel the water jets. This is something that opens up exciting options as well as technical challenges. If the yacht uses diesel generators, they can operate at optimal efficiency more of the time. The yacht could potentially run as an electric yacht for short periods of time (for instance entering and exiting harbours) if it had a bank of batteries. The layout of the yacht is far more generous than comparable yachts of similar overall length. This is evident as you would naturally expect on the main deck, which has a vast open plan area which includes a large dining area, lounge, pilothouse, and a second bar lounge. The large expanse of glass in all directions permits great panoramic vistas.

Accommodation for crew is housed in the Port Pontoon, with three twin cabins and a further single cabin. However, all crew cabins have additional Pullman bunks allowing for an additional four crew if required. The Port side also has the main galley, laundry and crew mess areas. The central tunnel area has plenty of space even on the lower deck, which has allowed us to incorporate technical spaces, engine/generator rooms, and an ample garage with space for a RIB tender, two waverunners and a couple or three jetskis. Some further space available in the central tunnel area can be dedicated to crew accommodation, if desired.

Adam Younger says: "The concept for the Equinox catamaran has given the ideal opportunity in taking aspects of performance multihull design and translating them into a larger design for the SuperYacht market. As such there are many changes and different concentration of priorities but it has still been possible to exhibit high performance characteristics".

"At 45m LOA and an overall beam of nearly 17m (2.66 ratio) we have been able to provide a design with a large accommodation platform and high volume / displacement hulls. This works very well in providing a spacious and adaptable interior and also from a performance aspect in giving buoyancy and initial lifting characteristics".

Much effort has been placed in providing an efficient and easily driven hull design. As with most planing hull catamarans – this requires concentration on initial acceleration and reducing wetted surface area. To this end a stepped hull configuration has been used to increase lift and also the postion of overall lift. The steps are designed using a system known as tapered steps, as developed by Adam Younger Design. The design is matched with twin lifting flow breaking strakes to the inner sidewalls of the asymmetric hulls. Finally, the hull design in section utilises a multi- deadrise angle form to provide a mixture of lift and handling – with variable deadrise angles into the forward sections to combine with good sea keeping abilities.

The tunnel height at 2m at the transom compared to a tunnel width of 8m to give a ratio 4 is designed to give a combination of stability and clean running at speed. The tunnel design also incorporates a central pod which then shapes into wave breaking form in the forward sections for extreme conditions.

The hull design with its many features gives the possibility of high speeds in the region of over 50 knots depending on power – but combined with new levels of comfort, stability and efficiency.