Stronger winds and testing tactical conditions saw major changes in fortunes throughout the Superyacht Cup fleet for the second day of sailing for the Astilleros de Mallorca Rally. The change to an easterly wind direction led to a close reach along the coast to the Fortis mark off Caba Regana, where a colourful array of spinnakers were set as the fleet headed across the Bay of Palma to the turning mark off the Isla de Sech.

Fortune favoured the early starters and the tacticians who chose to reach up into the bay when the wind first died and then changed to a south westerly. 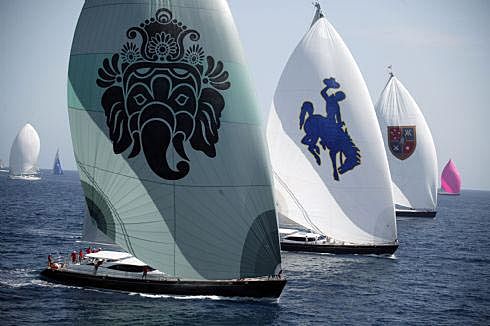 Captain Phil Wade on the 44.7m (147ft) ketch Timoneer, one of the most experienced 'rally' skippers, took advantage of the situation sailing around many yachts to take second place in Division 1.

Whilst Superyacht Cup supremo Patrick Whetter continued to see north easterlies on the committe boat Ilona up in the corner of the Bay, there was a large hole in the wind at the NZ turning mark off Isla de Sech.

At first glance it seemed that the handicapper for the pursuit starts had finaly got his sums right as half the 52-boat fleet came together as more and more yachts piled into the fray. For a short period in the ensuing melee yachts were drifting in every direction. 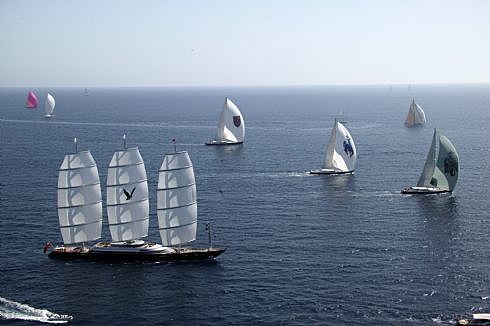 Considering the size, speed differential and lack of manouerabilty in light winds of many of the larger yachts, the fact that there was no damage is a testament to the boat handling and seamanship skills of the Superyacht Cup crews.

The J-Class Velsheda was one of the major losers as her owner/driver time and again tried to cross the fleet on port to get on the right side of the mark, finally crossing close to Mystere's bow to get back in contention. Even with the time lost, Velsheda still managed to finish 12 minutes ahead of close rival Ranger.

The fastest elapsed time around the course was set by Wild Oats IX in two hours 39 minutes, with Alfa Romeo seven minutes behind despite having held an early lead, and the Wally Y3K third fastest with an elapsed time of two hours 45 minutes.

The points weighting multiple for the second day was 1.0 compared with 0.3 for the first day. For the final day the start order will again be the reverse of the previous days elapsed time, but the vagaries of the conditions will have undoubtedly upset many of the start times.